Thomas Schreiner’s upcoming The King in His Beauty 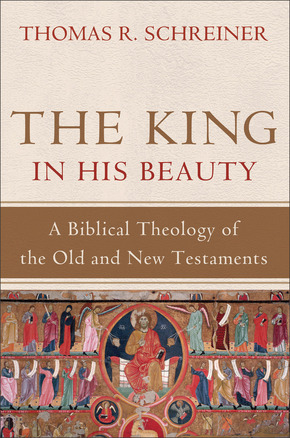 Tom Schreiner is one of my favourite scholars. Just ask my wife: apparently I have a bit of a man-crush on him.

So you’ll forgive my excitement over his upcoming book (June 2013) The King in His Beauty: A Biblical Theology of the Old and New Testaments. This is a 750 plus page book outlining the theology of the whole Bible as it unfolds. Yes, it’s going to be as epic as it sounds.

Schreiner has a talent for weaving together readible clarity, scholarly detail, and pastoral application; many can only achieve two of the three. I’m not alone in my opinion. James Hamilton – fellow-professor at SBTS – had this to say about Schreiner when mentioning this as one of his most anticipated books of the year:

…I can say that there’s not a saner, clearer, shrewder, godlier scholar I know. No one humbler or happier, no one whose life better matches what he preaches and teaches. No one whose writings I find more helpful, more convincing, more instructive…

Here are the Table of Contents, courtesy of Baker Publishing:

Now do you see why I’m excited?