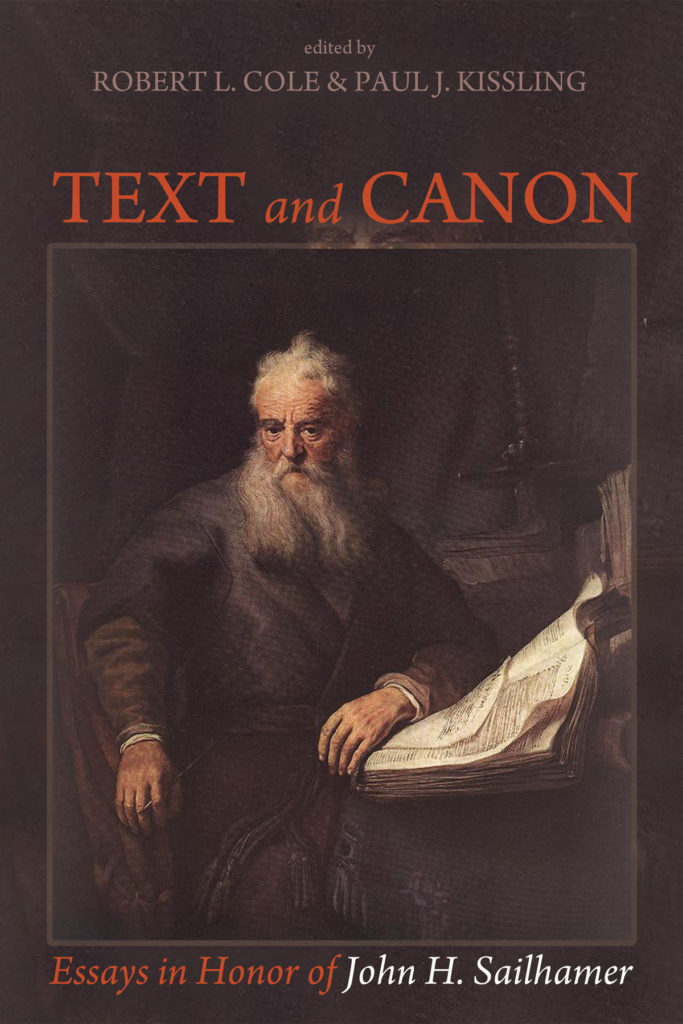 The essays speak to issues that would have made Sailhamer proud. Paul Kissling begins with the Testament of Jacob (Gen 49) and the Blessing of Moses (Deut 33). He explores the intervening chapters (Gen 50-Deut 32) to explain the differences between these two pronouncements upon the tribes. Seth Postell explores how the Abram narrative (Gen 11-15) literarily foreshadows Israel’s exodus from Egypt, journey to Sinai, and making of the covenant. This recalls his work on intertextuality between Adam as Israel. Kevin Chen investigates incidents in the Torah that display “the insufficiency of existing laws” (p38). They are seen to lack the providing wisdom needed for complex cases. Chen argues this is intentional on the part of the author of the Pentateuch. Jan Verbruggen traces Isaiah 6-12 to identify the significance of Isaiah, his sons, and the coming Messiah. Michael A. Lyons examines how Ezekiel uses priestly texts, particularly the Holiness Code (Lev 17-26), to enhance his rhetoric and affect his readers. Tracy McKenzie considers the literary and compositional purpose the second prophecy against Edom in Ezekiel 35. He finds that Edom in Ezekiel 35 and Adam (mankind) in Ezekiel 36 act as puns. The result is that while God judges mankind, He will also save and multiply them. This is confirmed elsewhere in the canon, such as the LXX translation of Amos 9:12, which read Edom as adam (see also Acts 15:16). Michael Shepherd “traces the exodus/new exodus theme within the compositional seas of the Twelve“ (p121). Robert Cole (re)considers the subject of Psalm 3. Usually the subject is taken to be David, in his flight from Absalom (given the superscription). Cole however, follows Augustine, in that it speaks of the Messiah and his death and resurrection (Ps 3:6). Expect a Psalmscast episode on this one in the near future. Jordan Scheetz presents “new trajectories” in canonical approaches by considering Daniel in light of internal and external canonical factors. Scheetz suggests that the assumption that canonical order in BHS and Baba Batra 14b present the earliest canonical form “should be critically reconsidered” (p154). Ray Lubeck pushes back on the assumptions that the book of Ezra-Nehemiah presents the characters Ezra and Nehemiah as exemplars of righteous leadership. Lubeck shows that, much like Moses or David, they are much more complex. In fact, several of their actions are condemned when considered in light of the canon, particularly the post-exilic prophets. Thus, far from being fodder for popular-level leadership books, Ezra-Nehemiah presents a failed return from exile due to failed attempts at spiritual revival. Finally, Joshua Williams considers Chronicles, the “‘most canonical’ book of the OT” (p189) in light parallels in Kings and links to the Pentateuch.

There was a surprising amount of odd grammar or simple typos. I must mention the footnote on page 170 that is just too good to pass up.

The Eye of the Beholder

As is usually pointed out, the quality of essays in edited volumes varies. However, this is often due to the eye of the beholder. Speaking subjectively, I must admit that I was uninterested by Kissling’s, Verbruggen’s and Williams’ chapters. The first two because I was surprised by the few insights found, and the last due to its highly technical nature. I was pleasantly surprised by Cole’s chapter, finding his idiosyncratic argument to be compelling. Although I’m sympathetic to his desire to read the Psalter messianically, I was initially skeptical that Psalm 3 could be read as such. His chapter shows the results of the canonical approach taken to its extreme, for better or for worse. Shepherd’s chapter was so impressively packed full of detail that I wish-listed all of his books. Expect reviews! Finally, Lubeck’s chapter. Though I found some of his arguments lacking, I am thoroughly persuaded by his conclusion. I find Ezra-Nehemiah freed from false expectations, and returned to their proper prophetic pining for the new covenant and spiritual renewal.

Some may be interested in individual chapters. Others may be fans of Sailhamer’s canonical approach in general. If one sounds like you, pick up Text and Canon. It is a fitting tribute to Sailhamer’s work and enduring legacy.

Many thanks to Pickwick Publications for providing a review copy. I was not required to write a favorable review.

Buy from Amazon and support MDS