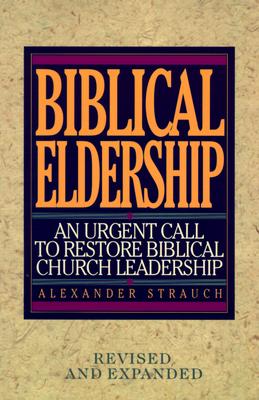 Who are the elders in your church? What role(s) do they play? Are they distinguished from the pastor, and if so, in what ways? Or do you not have elders at all?

Alexander Strauch, in the now-classic book Biblical Eldership (over 200,000 copies sold), calls churches to restore eldership to it’s biblical foundations. Strauch believes that too many churches practice eldership without understanding or implementing it correctly, so in this work he aims to, “define, as accurately as possible from Scripture, what biblical eldership is” (p10).

To achieve this end, this book is split into three parts. In part one, Strauch presents what he believes are the five major aspects to a healthy, biblical eldership: pastoral leadership, shared leadership, male leadership, qualified leadership, and servant leadership. Each of these must be present and fostered in church eldership. Elders are pastors, not a board of businessmen overseeing the church as any other organization. Biblical pastoral leadership must be plural, following the abundant biblical example. Eldership is a role set aside for qualified men and an man must be approved biblically before assuming an eldership role. And lastly, elders are to be distinguished as servants of all; true biblical leadership must follow the example of Christ. Strauch lays his cards on the table in these chapters, but does so with biblical support and quotes from scholars and teachers; these five aspects of eldership cannot be rejected out of hand without grappling first with Strauch’s arguments.

Part two is a short defense from the NT of elder-led church government as opposed to those who deny any structure found in the NT and other views. Strauch believes that the elder-led structure is clearly taught in the NT and best accounts for all the data.

Part three, the largest by far, contains the exposition of Scripture, which Strauch calls the “heart and soul” of the book as Scripture is the foundation for his arguments. In these 7 chapters, Strauch examines in detail any passage that is relevant to eldership in the New Testament, even including unexpected texts such as Philippians 1:1. The New Testament has a lot to say about eldership when it is allowed to speak with a unified voice.

To support his understanding that elders and deacons were the only leadership role in the early church, Strauch quoted Polycarp’s writing to the Philippians (p176). Strauch also interacts with Jerome (p179) and a few others. These sections were particularly interesting and revealed that some space devoted to the historical dimension of this issue would haven’t gone amiss. It would have served as supportive evidence in putting together the New Testament picture of eldership. However, while Strauch doesn’t pursue this dimension, he does use the early church when it is helpful.

My only real criticism is that Biblical Eldership felt a little lengthy and at times even redundant. There is a significant amount of overlap between the first and third sections since the latter is a more in-depth look at the texts supporting the former. Unfortunately, this means that the same texts and factors of eldership are discussed in detail twice, and sometimes a point is proven more than once. There were a few times in section three where the exposition was a little too verbose and had the feeling of a talk being formatted into a book. The longer conversational diversions would be ideal for talks, but could have been cut down a little in the book. Overall, however, the exposition was excellent and there were other times where I was glad Strauch dwelt on a particular point.

While some will only read the first chapters, the real strength in Biblical Eldership lies – unsurprisingly – in the biblical exegesis found in part three. Strauch has a knack for walking the reader through a biblical text with ease and clarity. He skillfully weaves together biblical quotations, greek word studies, and quotes from scholarship to add to his case. Strauch wisely canvasses the whole NT, rather than honing in simply on 1 Timothy 3! Passages from Acts, 1 Thessalonians, Philippians, James, 1 Peter, and others are all treated and help create a lucid picture of eldership in the early church.

While some may not find it natural to read Biblical Eldership cover to cover, it will certainly be an excellent resource to turn to again and again for Scriptural teaching on eldership. The Scripture index at the back proves invaluable also.

Pastor/elders will of course profit greatly from this book, but even the churchgoer would benefit from understanding the elder’s role and all the Scripture has to say about it – after all, the majority of the NT letters were written to the churches, not only the elders. Some will disagree with Strauch more than others dependent upon their view of church polity, but all could benefit from his exegesis and pastoral wisdom.

Strauch exhibits a clear and contagious love for the church and the elders’ role – a servant leadership. This work perfectly fulfils a much-neglected lack. I’ve seen Biblical Eldership on many pastors’ bookshelves and each one that I’ve spoken to has praised it highly. I could only do the same.

Many thanks to Lewis & Roth for providing this review copy in return for a balanced (albeit, late!) review.

Why I Love Calvary Chapel