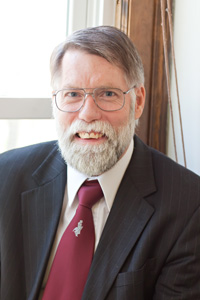 We’re continuing our series on different interpretations of Daniel 9:24-27, and this time we are talking with Peter Gentry, Donald L. Williams professor of Old Testament Interpretation at the Southern Baptist Theological Seminary in Kentucky. He is co-author of Kingdom Through Covenant with Stephen Wellum (which has a chapter on Daniel 9) and is an expert on biblical languages.

Note: some of Gentry’s answers are adapted from his article on Daniel 9 in the upcoming revised Holman Bible Dictionary. This was done with his permission.

Unlike the first, second, and fourth visions of Daniel 7-12, which describe a sequence of four human kingdoms followed by the everlasting kingdom of God, the third vision in 9:1-27 deals with the end of exile. What was made clear to Daniel is that the return from exile is in two stages: (1) the return from Babylon will take 70 years, but (2) the return from a broken covenant relation with God will take seventy “sevens”.

Since the text of Jeremiah 25:8-14 to which Daniel 9:2 refers is based on the idea of the land enjoying sabbatical rests, the seventy “sevens” or “weeks” of Daniel 9 are doubtless also sabbaticals. The former is ten sabbaticals, the latter is ten jubilees, i.e. an ultimate Jubilee.

While Cyrus gave the decree in 538 BC, rebuilding the city was hindered until Artaxerxes confirmed the original decree in 457 BC (Ezra 6:14). So seventy sabbaticals brings us precisely to the death of Jesus Christ in the 70th week.

Jesus is the “Anointed One” and the passage is fulfilled in His first coming. The events in the last part of Dan 9:26 and v27 then would refer to the destruction experienced by the Jews, which finally led to the events of AD 70.

There is absolutely no reason in the text to see a gap between weeks 69 and 70 unless you come to the text with a preconceived system.

It is extremely important to note how Hebrew literature works. Normally authors repeat themselves, going over the same topic twice, usually from different angles or perspectives. Therefore Dan 9:27 is parallel to Dan 9:25-26. The Messiah is “cut off” after the 69th week according to Dan 9:26. In the 70th week, the Messiah strengthens a covenant with the many. Both statements are essentially referring to the same thing: the cross and its aftermath.

The chronology is computed in sabbaticals, not years, so the last 3.5 years are irrelevant.

Surely “anointed” and “leader” in Dan 9:25 refer to the same individual, as context and logic would require the same referent for both in the very next verse. What could otherwise indicate such a dramatic switch in referent? the person confirming the covenant is the Messiah, not the Antichrist. He does this for “the many”, a term recalling Isaiah 53:11-12. His sacrifice brings an end to all sacrifice.

This is a central text dealing with the role of the new covenant and Messiah in achieving these purposes and has nothing to do with the antichrist.

I am not given to labels. I do not know if it has a name. I have not seen anyone else with precisely the same view, although there are views that are quite similar. For further study, I guess we should call it the New Covenant View of Daniel 9:27.

I recommend the following article:

I consider my view a literal interpretation of the text, meaning I follow the normal sense in interpreting Hebrew literature according to its own rules. I am highly irritated by dispensationalists who think their interpretation is the only literal one. Their use of the word “literal” goes against the tradition of Christian hermeneutics when speaking of grammatico-historical interpretation.

Of first and greatest significance is that Daniel 9 is speaking about the inauguration of the New Covenant by the Messiah. This interpretation adds to the biblical teaching about the work of Christ, although most scholars think that v. 27 refers to the Antichrist. I have clarified more than most scholars that Daniel 9 is in line with the doctrine of substitionary atonement for the many as defined by Isaiah 53, since the many in v. 27 is an allusion to Is 53 and the Messiah is cut off, but not for himself. Many Christians do not understand that the return from exile is in two stages: physical and spiritual. The spiritual return from exile begins with the first coming of Christ and ends with the second coming of Christ. This alone is a significant improvement over the understanding of most Christians as to eschatology.

Some people have drawn the wrong conclusions from my article. At the present time, I am still forming my eschatological views. My first goal is to develop an accurate exegesis of the text. Then I can develop an overall eschatology. Certainly the dispensational understanding of the church age fitting in between weeks 69 and 70 is wrong. Some have thought that I am a preterist, but that is not a necessary conclusion. I probably lean towards amillennialism, but that has to do with Revelation 20, not Daniel 9.

I would like to thank Dr. Peter Gentry for taking the time to do this interview on his view of Daniel 9. Expect another interview Monday.