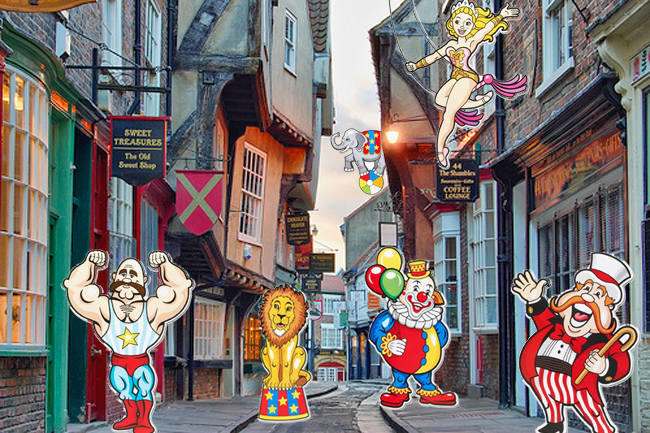 Welcome to the July Biblical Studies Carnival! This month, the Carnival has traveled to sunny(ish) York, England (see above). In this post, you will find news, posts and media that I found noteworthy and interesting. I can’t escape this niggling feeling that I’ve missed something embarrassingly huge this month, but what can you do?

Before we begin, however, a word about the traveling Carnival. Last month the Carnival hit Cambridge, with William Ross hosting, and in August will travel all the way to fellow Commonwealth member, Victoria, BC  with Bob MacDonald hosting. For the most part, the rest of the year is open and the clowns are getting restless, so if you are interested in hosting a Carnival, get in touch with Phil Long at plong42 at gmail.com. As he puts it,

Carnivals are a great way to attract attention to your site if you are new blogger, but more importantly it gives you a chance to highlight the best and the brightest in the world of bibliblogs.

First up is by far the most significant event for the Biblical Studies world this month, nay, this year: the meeting you all demanded, in all it’s blurry glory. 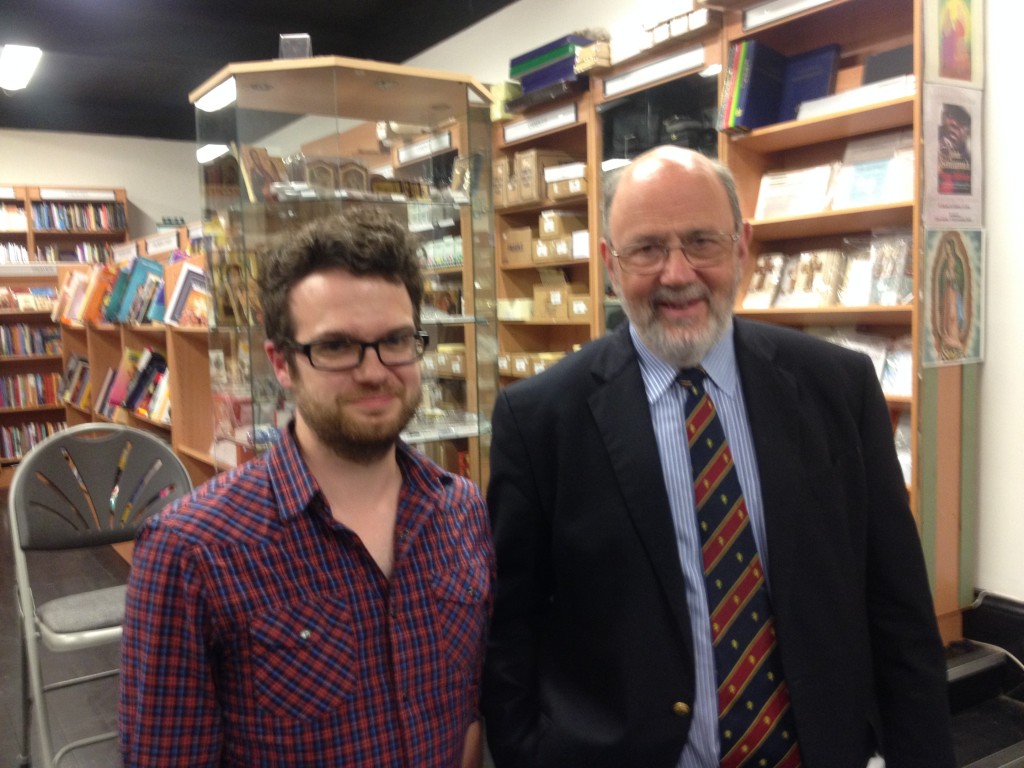 The blurriness may make you suspect this is a Bigfoot-sighting-like hoax, but no, this really happened. This month, N.T. Wright (but I call him “Tom”) traveled the UK to speak on his book Simply Good News. He packed out our small Christian bookstore in York with 40ish people (take that, Americans!) and gave a short talk on the book and then signatures. I asked him on his upcoming book on the cross, and he said he will hopefully get it going later this year.

On the 10th-11th Tyndale House in Cambridge held a conference entitled Linguistics and the Greek Verb. The presentations will be published in book format as The Greek Verb Revisited: A Fresh Approach for Biblical Exegesis, but in the meantime, check out Mike Aubrey’s ongoing summaries from some of the talks (and some beautiful photography!).

After 15 years of Christian retail, Louis McBride from Baker Book House Church Connection became a publicist for Baker Academic and Brazos Press. He gives his thoughts on the change here.

William Ross shares the news that beginning with this year’s Evangelical Theological Society meeting there will be an entire session dedicated to Septuagint Studies.

Over at Christianity Today, Simon Gathercole gave five reasons why the Gospel of Jesus’ Wife is fake. He and others also submitted articles to the most recent New Testament Studies, which is free right now. Get it while you can!

Exegetical Tools had produced some Colossians Greek Reading videos for intermediate Greek learners to retain and improve their Greek. These look ideal for teachers as well. They also glowingly reviewed Chris Tilling’s significant Paul’s Divine Christology (I hope to get to it soon!).

Jennifer Guo celebrated the 50th anniversary of the NIV and shared some videos, and also reviewed 40 Questions About Baptism and the Lord’s Supper and The Resurrection of Jesus: A New Historiographical Approach by Mike Licona.

Fellow Aussie (and Perthite, no less), Matthew Malcom, asked why Acts ends before Paul’s trial and has an interesting suggestion.

Louis McBride, over at Baker Book House Church Connection, summarized Gerald Hiestand’s chapter “Six Practical Steps toward Being a Pastor-Theologian” in the upcoming Pastor as Public Theologian, edited by Kevin Vanhoozer and Owen Strachan: post one, two and three.

George Athas discusses the deciphering of the oldest biblical manuscript since the discovery of the Dead Sea Scrolls. This scroll is a burned fragment of the first eight verses of Leviticus. He also reported the discovery of a clay image of a Canaanite fertility goddess from the Late Bronze Age (1550–1200 BC).

William Brown reviewed The Conflict Myth & the Biblical Tradition by Debra Scoggins Ballentine and had this to say about it, “discussion pertaining to the Hebrew Bible, and especially Chaos, need to take her research into account.” He also reviewed A Prophet Like Moses by Jeffrey Stackert, which “presents a ground-breaking and unique perspectives on how to understand the relationship between prophecy, law, and Moses”. (HT: William Brown)

I’m delighted to announce that my friend and fellow teacher at CCBCY, Randy McCracken, had a journal article published in the July-Sept 2015 volume of DTS’ Bibliotheca Sacra (BibSac). It is entitled How Many Sons Did Absalom Have?: Intentional Ambiguity as Literary Art and can be read for free on his blog. Randy is also holding a giveaway for his book Family Portraits: Character Studies in 1 and 2 Samuel and has just posted a list of his favourite Genesis commentaries.

Wayne Coppins at German for Neutestamentler has a unique blog that highlights and even translates works of German scholarship. Particularly interesting is his post with English translations of Christoph Heilig’s comments on Echoes and Empire Criticism in the work of Hays, Barclay and Wright. (HT: Wayne Coppins).

Ben Witherington III has been discussing Jacob Arminius: Theologian of Grace with one of its authors, Keith D. Stanglin. Here is his final (and fourteenth!) post.

Bob MacDonald has analyzed the language of Haggai 1.

My friend (yes I have more than one!), Spencer Robinson at Spoiled Milks, has been reviewing recordings of Rikk Watts teaching Isaiah at Regent. He also posted a review of Peter David’s 2 Peter and Jude (Pillar) series and his experience using it in Logos (with pictures!).

Aspiring to be a Biblical scholar? Jonathan at Linguae Antiquitatum a graduate student, and he gave a review with personal application (this warms my Bible College teacher heart) of books by Witherington and Gupta on advice for budding scholars (HT: Jonathan).

Dan Wallace has a team documenting manuscripts at the National Library of Greece and has posted about it here (A New Gospel Manuscript in Athens?) and here (Gregory-Aland 1761: A Gospels Manuscript?).

Larry Hurtado announced the third edition of his One God, One Lord (Nov 2015) and weighed in on the scholarly consensus regarding the Jesus’ Wife fragment.

Over at ReadingActs, Phil Long is discussing some of the wisdom Psalms, so far: Psalm 1:2-3, Psalm 1:4-5, Psalm 19:1-6, and Psalm 19:7-11. He also reviewed Constantine Campbell’s Advances in the Study of Greek and Wesley Hill’s Paul and the Trinity.

Over at Think, Andrew Wilson began pondering a Credobaptist theology of children (post one, post two), summarized the recent debate series about homosexuality between Preston Sprinkle and Jeff Cook, and also reviewed Wesley Hill’s Paul and the Trinity.

Bart Ehrman and Tim McGrew discuss the reliability of the Gospels in two episodes of Justin Brierley’s awesome Unbelievable? podcast.

Michael Heiser has just finished working through the book of Acts on the Naked Bible podcast. Heiser always has interesting points to make, and I’m excited to hear he’s starting Leviticus next.

Nancy Guthrie has interviewed Michael Lawrence on teaching Acts and Dale Ralph Davis on teaching Joshua for her Help Me Teach the Bible series on the Gospel Coalition podcast.

Peter Gentry is working on the Isaiah commentary for the Hearing the Message of Scripture series (see my reviews of Obadiah and Jonah) and is teaching the book for Sunday School at Franklin Street Church. The audio is not amazing, but these are definitely worth the effort. I am up to the 73rd recording, which is only Isaiah 27! (If you wonder how I can listen to so much audio, you’re not a parent of a 9mth old who is constantly teething and needs rocking all through the night…).

Kevin Vanhoozer and Gerald Hiestand were interviewed on the Mere Fidelity podcast about their respective books on pastor-theologians.

The Bible Project has produced an excellent video summarizing Numbers and are raising funds for one on The Law.

And like that, the Carnival is over. The streets are quiet except for a few odd juggling balls rolling around and an odd elephant surprise or two. I am grateful to have been part of this (thank you, Phil), and recommend you look out for Bob MacDonald’s carnival at the end of the month!