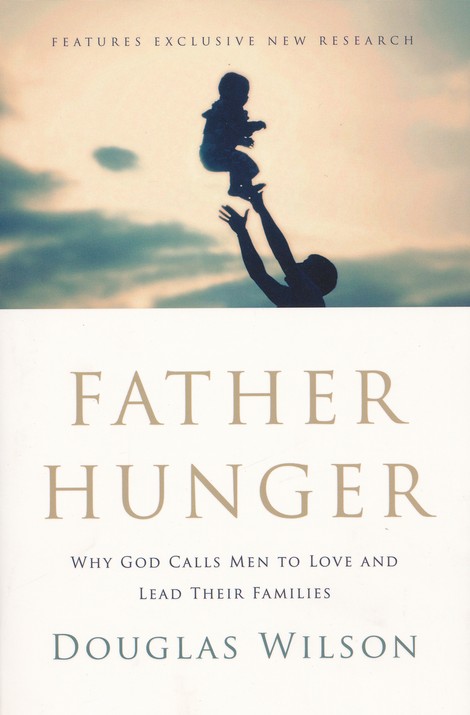 Remember John Eldredge’s Wild at Heart? I first picked up the book when I was in my final year of high-school, and while the majority of the book has disappeared from my memory – along with the majority of my high-school experience, thankfully – I do remember being stimulated by his call to be a Godly man. Despite (or due to?) having grown up in the church, a robust vision of Christian masculinity had mostly escaped me; instead, Jesus and His followers should above all things be nice. I longed to know what it meant to be a man created in God’s image.

I also remember being weirded out by some of his theology and out-of-context use of Scripture, so I never finished the book.

Doug Wilson’s Father Hunger reignited many of these same longings in me 11 years later, but was absent of the weird theology. Well, mostly absent.

Wilson see the multitude of absent or unequipped fathers as the cause for many wrongs in the world today, and the only solution is a rediscovery of the Father. But this rediscovery does not come about from attending a conference or two or by finding the secret ’10 tips to…’, but through having one’s entire worldview reshaped in the image of God the Father. This book is theology at heart, but continues farther downstream; Wilson aims to examine the implications and applications of fatherhood to all areas of life. This is not a book that walks in a straight line chapter-by-chapter, rather each chapter is an essay addressing broad topics, functioning more like a spoke in the wheel of understanding fatherhood in God’s image.

Since the heart of this book is how the fatherhood of God applies to all areas of life, Wilson begins with the relationship of the Father to the Son and how it is a model for all fathers, since earthly fatherhood has this as a foundation and goal. Chapter 2 directly bucks against egalitarianism by stating that to begin to be a good father, one must embrace the difference in gender roles and see fatherhood as having a good purpose.

There is true glory for a man in accepting his assigned place, and doing so in all humility. For a father to recognize that God has assigned him a particular role is not arrogance. Neither is it pride when he picks up his responsibilities. — Kindle location 155

In chapter 3, the problem of fatherlessness is examined more directly. Many fathers are absent or ignorant of their role, and the solution is not family retreats but the Gospel. Transformation is required for fatherhood to be restored. Chapter 4 seeks to clear the debris of substitute masculinity, and clarifies that while there are different cultural expressions masculinity, there is such a thing as true, objective masculinity; Wilson’s definition is “the glad assumption of sacrificial responsibility“.

Atheists are “prophets of fatherlessness” according to chapter 5, and Wilson argues that the West’s desire to rid ourselves of God is ridding ourselves also of a Father and thus true fatherhood itself. Our fathers will not reflect the true Father, and unsurprisingly will be as absent as they have made Him. The rest of this chapter draws from Romans 1:21 and sees thanklessness and a denial of God’s sovereignty and as a breeding ground for atheism today.

In chapter 6, Wilson gives his case for Christian education. Quoting Ephesians 6:4, he puts the responsibility of education squarely on father’s shoulders, and argues that the Greek used in this verse imply an all-encompassing education in the Lord, something that secular education cannot provide.

For the sake of space, I will not summarize the remaining chapters. They continue in much the same fashion, addressing an issue and the implications it has on fatherhood, and then in turn the necessity to return to true fatherhood.

Some won’t see this book as very practical. In fact, some will find the chapter on discipline as the best and, while it is a great chapter, they would be missing the point. Yes, there is much practical advice to be found in this book, but on the whole Wilson is attempting to do something deeper, perhaps slower-acting but hopefully longer-lasting. Wilson draws from the letter to the Ephesians and that it begins with three chapters of indicatives before moving to imperatives. This book tries to do the same, without having the foundational view of fatherhood that Wilson is trying to provide, practical application will fall flat sooner or later.

Wilson aims to give a big Biblical vision for fatherhood, and tear down competing ideas. I think on the whole he succeeds at this, with a few misfires at times. I think some of Wilson’s ideas go a little far, but they are worth reading and considering. Some readers are offended by Wilson’s tone at times, and I’d suggest that it’s worth giving him the benefit of the doubt as you read this book. Don’t take everything he says seriously, and don’t take everything he says as law. With the former, often Wilson uses sarcastic or borderline language to make a point, and I’ve seen careless readers criticize him without realizing this fact. With the latter, sometimes his ideas are presented as law, and as the only viable option for Christians.

It’s also worth saying that this is a book written for men by a man. I don’t mean that women can’t read or receive from this, but its approach and tone are specifically appropriate for men. Men appreciate strong words, and this book is full of them. Men (generally) love getting their behinds kicked with truth. This is an approach that seems to work, especially in today’s emasculated culture. This book is like having a sit down with a strong Godly man, you won’t feel comfortable but you will be challenged and feel glad for it. However, eavesdroppers may not feel the same way.

All of the chapters had something to offer, but one of my favourites was on eldership and men in the church. Wilson challenges the common criteria for elders today (theologically trained and nice), and emphasizes Paul’s criteria that elders be good fathers (1 Tim 3:4), and how fatherhood is desperately needed in the church today, as lessons are learned by imitation (1 Cor 4:15-16) and children imitate their fathers.

Scripture pervades the discussions in this book. One of Wilson’s strengths here is his dependance upon Scripture for his viewpoint. Many Christian books such as this are filled with worldly wisdom but without Biblical foundation, not so with this book. The very heart of this book is a welcome rediscovery of the Father’s relationship to His Son, and how that overflows into earthly father’s relationships with their children. The attempt to give this big picture is one of the strongest points of this book. I am not the kind of man who feels empowered by tips as much as huge ideas. Tell me a good idea for a date with my wife and I will be encouraged. Tell me that marriage is a picture of Christ and the Church and I will be transformed.

If you are a father, I encourage you to read this book. It is not faultless, but when it hits, it hits hard.

This is a bold comparison, but I think Wilson is a writer like Lewis or Chesterton; they all have wacky views at times, but we admire and read them because they have something interesting to say about virtually anything, and they say it very well. Perhaps that accounts for their wackiness at times; when taking that many shots, there always be a few misses.

Many Christian authors only address narrow concerns and with a copy-paste approach to each others’ work, but we need more writers today like Wilson that attempt to boldly traverse every aspect of our wide world with God-tinted glasses, and take others with them.

[Special thanks to Thomas-Nelson publishers for providing me with this book via netgalley.]