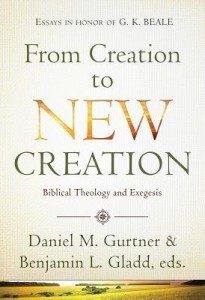 Numerous proposals have been offered to resolve this problem:

Obviously, the last suggestion is not an option to those with a high view of Scripture, but it’s unsurprising that may land on that conclusion given the alternatives! This is certainly a tricky passage, and new suggestions for how to resolve it are always welcome.

In From Creation to New Creation – a series of essays in honor of G. K. Beale – I think Nicholas Perrin gives a compelling reason for Abiathar being in this story; a purposeful and theological reason. His essay must be read in full to gain the entire argument, but I’ll attempt a summary here.

The Temple, a Davidic Messiah, and a Case of Mistaken Priestly Identity

There are two basic stages to Perrin’s argument:

Perrin argues that Mark 2:23-28 must be read in light of the larger conflict between Jesus and his followers and the high priest and his followers, particularly with Jesus’ continual rejection of the current temple priesthood. Jesus redefines who meets the purity standards (Mark 7:18-23), He cleanses the temple (Mark 11:15-19), proclaims Himself to be the true source of forgiveness (Mark 2:1-12) and refers to Israel’s leadership as wicked tenants, His followers as true tenants, and Himself as the cornerstone of the new temple (Mark 12:1-10).

Mark 2:23-28 is another scene in this ongoing conflict between Jesus and his followers and the religious establishment. The point is that just as David and his followers were allowed to eat the showbread in 1 Sam 21, so also Jesus and His followers have the same prerogatives, as the true temple people. Mark 2:23-28 should not be understood as an ethical debate about the Torah, but rather an announcement that YHWH is going to transfer the “priestly mangle” from the official temple leadership, who “in their resistance to the true Son of David were liable to judgment, to his very own disciples” (p175).

This leads to the answer of “why Abiathar”. Abiathar is a descendant of the unfaithful high priest Eli, who was promised God’s judgment (1 Sam 2:30-36). This judgment is fulfilled when Abiathar joins in with Adonijah’s rebellion against the Davidic king Solomon (1 Kings 1:7). Solomon responds to this treachery by deposing Abiathar in favour of Zadok (1 Kings 1:8; 2:26-27). So while Ahimelech was the high priest in David’s story, Jesus chooses to refer to Abiathar, “as an emblem of a rebellious and therefore failed priesthood” (p175). Jesus is saying that He and His followers are like David and his men, but the religious leadership are like Abiathar and faced a similar future rejection from God.

As always, Jesus is controversial, but not by misremembering a detail! Something more profound and ironic is at play here. While this is a fairly convoluted explanation, in essence it is elegantly simple. Jesus identifies Himself with David (the chosen of God) and his opponents with Abiathar (the priesthood under God’s judgment).

So does this explanation work? Perrin gives far more detail than I have been able to in this post, but hopefully I have done his essay justice.