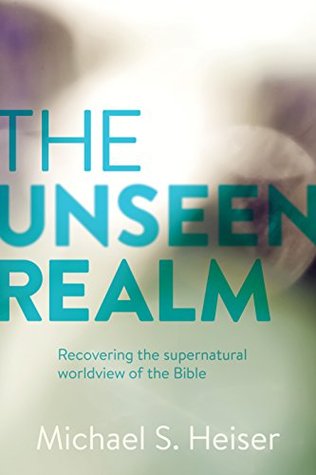 How does one even begin to review a book so profoundly impacting and paradigm-shifting? Perhaps with a personal anecdote? I used to lean towards skepticism when it comes to the supernatural. This is hardly healthy for a Christian. It’s not that I disbelieved God’s providence, Jesus’ miracles, the resurrection, or even the enduring nature of the Spirit’s gifts; rather, I had an unreasonable inclination to find “natural” explanations for “supernatural” experience claims. What was the cure? First, marrying a woman gifted in more observably supernatural ways. Second, study of the Bible: the unseen realm is just unavoidably there in Scripture. It is in this latter area that Michael Heiser’s work, especially The Unseen Realm, has been so important.

Sadly, my experience is far from unique in the Western church. Heiser himself went through a similar transformation when he read Psalm 82 with fresh eyes. In Heiser’s words, “the [Western] believing church is bending under the weight of its own rationalism, a modern worldview that would be foreign to the biblical writers” (p17). How do we solve this? Stop “[stripping] the bizarre passage of anything that makes it bizarre” (p18); rsther, “if it’s weird, it’s important” (p19). This is Heiser’s purpose in writing The Unseen Realm: to get “their supernatural worldview in your head” (p13). The Unseen Realm is a re-reading of the Biblical story with eyes open to the supernatural world.

After two chapters that address these points, the book unfolds over 40 chapters divided into 7 parts broadly following the Biblical story. Part 2 examines concepts such as the Divine Council, the role of Eden, and the image of God. Fundamental to Heiser’s work is recognizing the real existence of other elohim – other gods – whilst maintaining the uniqueness and supremacy of Yahweh. Part 3 addresses issues such as the fall of humanity and Satan, the Genesis 6 Sons of God, and the Tower of Babel, where Yhwh’s disinherited the nations. Part 4 continues by introducing Abraham, and the Two Powers (visible and invisible Yahweh). Part 5 presents the conquest of the land as an intentional cleansing of the Nephilim, and introduces the widespread significance of Bashan/Hermon. Part 6 discusses the temple’s connection with God’s throne, the nature of prophets, and the divine misdirection in the Messianic hope. Part 7 turns to Christ and the divine conflict between Yhwh and Satan. Part 8 examines end-times issues such as the judgment of the fallen divine beings, the “foe from the north”, the battle of Armageddon and our final eternal state.

This above summary can only hint at the diverse concepts covered in this book. Needless to say, it is a dense but stimulating read. The breadth and depth of Heiser’s own study is abundantly clear. In other words, The Unseen Realm is far from a presentation of Heiser’s pet ideas and speculative doctrines. One cannot dismiss him as a idiosyncratic kook; there is just too much peer-reviewed scholarship and evidence supporting the book. In fact, much of what Heiser argues is already accepted in wide swaths of Biblical scholarship; it has simply not overcome the chasm from academia to the church. Nor is this a liberal scholarship in sheep’s clothing. Despite how “odd” this book can get at times, Heiser is surprisingly orthodox. The numerous evangelical endorsements only confirm this point.

Albeit, for a book so ambitious, some missteps are unavoidable. Heiser wants us to throw away our filters and let the Bible speak for itself. While he means well, being totally untethered from traditions and accountability is arrogant and dangerous. Rather than reject our heritage, it’s better to submit it to Scripture, and adjust accordingly. It’s ironic that Heiser is effectively replacing one filter (church tradition) for another (the supernatural worldview), and this leads to some conclusions that appear to be favoured simply because they are the most “supernatural”; or worse, “strange”. At times Heiser presents a viewpoint as being beyond critique simply because it supposedly reflects “the ancient worldview” (unlike the alternatives, which are “modern”). This is a rhetorical slight of hand that avoids argumentation: my view is right because it’s most ancient. The clearest example is his work on free-will. Heiser’s view is apparently how “an ancient Israelite would have embraced this parsing of foreknowledge, predestination, sovereignty, and free will” (p66). This wins the debate without an argument. However, to my eyes, Heiser is simply presenting Libertarian free-will dressed in ancient Israelite garb. On that note, this section was out of place and unnecessary and I think Heiser was a little out of his philosophical depth. With all that said, keep in mind that my critiques come from someone who has profited immensely from The Unseen Realm and hope (most) the ideas within find acceptance in the church.

Virtually every chapter was fascinating and provocative, though many were outright revolutionary. Among other things, I can never conceive of Psalm 82, Deuteronomy 32:8-9, stars, mountains, Eden, Bashan, and Ba’al the same. Despite the sheer abundance of ideas in The Unseen Realm, his book has far from exhausted this paradigm-shift; it has only begun it. For me, it has begun a re-reading of Scripture with more ancient and supernatural eyes. Recognizing and embracing the “weird” in Scripture has not resulted in an unfamiliarity or distance with God’s word; in fact, it has only fueled greater hunger, appreciation and excitement.

As I said at the start, it’s difficult to try and review a book this impacting. I wish every Christian would pick up The Unseen Realm. Heiser has also released Supernatural, aimed at a wider audience, though The Unseen Realm is surprisingly approachable and easy to read. I would recommend The Unseen Realm to any interested Christian and Supernatural to those with less interest or time. My wife and I actually read the book together, and it continues to spark discussion between us. One need not agree with everything Heiser says; his goal is primarily to open the reader’s eyes to the absolute profusion of passages that speak of the unseen realm. On this front, The Unseen Realm meets and exceeds the goal. It’s time to re-read the Bible with supernaturally-awake eyes.

For those who want more, The Unseen Realm has a companion website popping at the seams with more information. There is also Heiser’s Naked Bible Podcast, which is always provocative.

Many thanks to Lexham Press for providing a review copy.

Buy The Unseen Realm on Amazon

Review: The Temple and Tabernacle by Daniel Hays