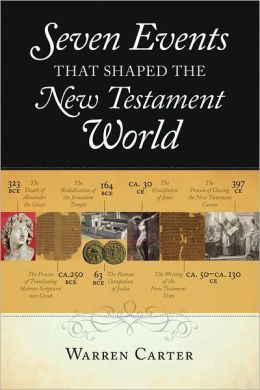 Reading this book felt a little like watching Fawlty Towers.

In the British TV series Fawlty Towers, the viewer constantly anticipates what will go wrong next. The comedy is proportionate to the level of disaster, and in the show disaster is around every corner – and frustratingly, Bazil Fawlty only makes it worse!

Similarly, reading Seven Events That Shaped the New Testament World (hereafter Seven Events) felt like watching Fawlty Towers in that I would arrive to each new section with both a certain level of dread and macabre curiosity, wondering what would “go wrong” here.

But I’m getting ahead of myself, let me back up and introduce the book.

In Seven Events, Warren Carter seeks to “help [our] understanding of the New Testament” by “provid[ing] an orientation to some important aspects of the early Jesus movement and the New Testament” (loc 63). To achieve this end, he chooses seven key ‘events’: four from before Christ, and three that resulted from His coming.

Carter uses each event as a launching pad and jumps to related cultural dynamics that were important to Christ-followers, often making connections to relevant New Testament passages. Carter’s style is very accessible and enjoyable to read; he presents history in a very interesting and understandable way without giving the impression of reductionism.

So where does this book go wrong? To put it simply, Carter’s liberal theology and scholarship permeates this book like leaven. I looked at some reviews before reading this book, and while some mentioned something along the lines of “not agreeing with everything Carter says”, I regret to say that I disagreed with the majority of what Carter said, at least when it came to Scriptural interpretation and application for the believer. It is for this reason that reading Seven Events felt like watching Fawlty Towers. It was both entertaining and terribly frustrating.

When reading the book, I continually thought to myself “He can’t be serious?” but unlike Fawlty Towers, however, Seven Events is not a comedy, and my frustration with the book only resulted in laughter some of the time. I am no expert as to whether the history is good. I greatly enjoyed the historic sections, but ultimately Carter’s liberal views and unwillingness to represent conservative responses were the core issues for me.

Let me give you some examples. Much could be said, but here is a somewhat random sampling of the most frustrating ideas in this book:

Now of course in identifying these as issues, I am also revealing my own theological stance. Some holding different views may think I am being overly harsh in my review, and I do hope this is not the case. However, I expect others will be glad to know about these issues so they can properly evaluate whether they should read the book or use it in a class.

Carter’s approach, style and format are all very enjoyable, but for me the content is where this work falls flat. And of course, content is king. However, if my complaints against the content are irrelevant to the reader, then I am sure they will profit from this book due to its other strengths. This book would fit well as part of a New Testament background or introduction class for college age students. Carter’s style is fun and keeps the reader engaged.

I personally would stay far away since ultimately it encourages a skeptical and condescending attitude towards the Word of God.

Interview with Joel Wingo on the Book of Job: Summary