Is Romans 7 About Israel’s Past and Present? (William Dumbrell) 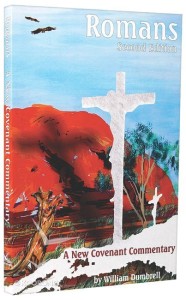 We have looked at the three views presented in Perspectives of Our Struggle with Sin but that book doesn’t exhaust all the options. I just picked up William Dumbrell’s hard-to-get Romans commentary (available only in Australia; thanks to my cousin for sending it over!) and thought I should share his view. Dumbrell argues that Paul’s focus is squarely on national Israel in the past and present.

View the other posts in this series.

Dumbrell rejects the idea that the “I” refers to Paul, as he had a positive view of his righteousness under the Law (Phil 3:6) and Rom 7:9 makes little sense as a description of Paul’s experience. The “I” is used corporately to refer to national Israel.

The focus is squarely on the giving of the Law at Sinai, where the Law “brought the sentence of death even though, through obedience to the covenant, law was meant to bring life to the nation of Israel” (p111). So for Dumbrell, the “death” experienced is very literal.

Rom 7:7-12 is “a survey of Israel’s experience in the Old Testament under the Old Covenant”. Although the “I” “probably refers to Sinai”, and not Paul, Paul is certainly connected to this story as “Paul’s history is the history of his nation” (p111).

Here is the twist: the shift to present tense in Rom 7:13-25 is from Israel’s past (7:7-12) to her present, describing “national Israel’s post-cross position” (p113). So these verses describe the post-Christ situation Israel finds herself in, continuing to practice the now-defunct Mosaic Covenant with sacrifices rendered ineffective by the cross.

What role does Rom 7:25 play in the argument?

Rom 7:25a “points forward to the expounded solution” in Rom 8 and Rom 7:25b “stresses the reality of the situation, which makes the anticipated deliverance so pressing” (p112).

Since “Romans 7 is concerned with the contemporary post-cross Jewish problem, the issue raised in Romans 7 is not directly relevant to Christians” (p108).

For Dumbrell, Rom 7:13-25 describes the post-Cross present situation of Israel. Although I am partial to the idea, I don’t really see any basis in the text for such specificity. I suspect Dumbrell is making this distinction in order to harmonize the positive role of the Law we find in the OT with the more “negative” role we find in Romans 7. This would then mean that Torah observance was a good thing, but only brings death post-Christ. With the Old Covenant being superseded by the New, it no longer “works” as a valid expression of faith. Again, this is insightful and compelling, but the problem is that I’m not sure we can find this in Romans 7! We don’t see the “I” lamenting that the sacrificial system no longer covers sin, for example. Though what Dumbrell says may be true, the focus seems different than this in Rom 7. What’s more, Rom 7:7-12 describe Israel’s past experience under the Law as bringing death also, so I’m not sure how that fits either.

Dumbrell argues that the “I” cannot be Paul, since he had a positive view of his prior life under the Law in Phil 3. But given Rom 7:7-12 as Israel’s past experience, and Paul would include his story in hers, I’m not sure that Dumbrell harmonizes the two passages.

However, Dumbrell’s reading is very sensible and overcomes some of the difficulties in the other three views I’ve presented so far. I’m particularly drawn to bringing Israel to the foreground in this passage with Adam and Paul remaining more in the background. It think this makes the best sense of Romans 7:9, which I’ll unpack a little more in the final post.

We’re almost at the finish line! Next post I will give my own view.