I used to walk a good 40 minutes round-trip to my job and to redeem the time I’d listen to a sermon or theological podcast and have built up a list of recommendations. I don’t agree with everything said, but these are informative and thought-provoking. 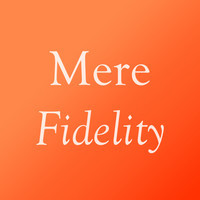 Want a good 35 minute podcast discussing issues ranging from moral orthodoxy, the Trinity, transgenderism, or the influence of N.T. Wright, by a group of articulate and level-headed men from both the US and UK? The new podcast Mere Fidelity has done all the above, and it’s only just begun! Here you will not hear glib comments on complex issues, rather, the contributors wrestle with an issue without hijacking the opportunity to grind denominational or theological axes. That is not to say that the contributors aren’t strong in their own views, but they display a good humble orthodoxy in approaching issues.

I have listened to every episode so far and thoroughly enjoyed them all, though I do have a few suggestions if the contributors ever get the chance to read this:

Anyhow, Mere Fidelity is highly recommended. The recent episode on criticism/defense of N.T. Wright was especially good, though you will want the hear the first part before listening to it.

Update: just to say that my above suggestions don’t apply to the latest episode: “On divine accommodation”!