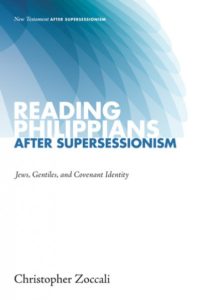 Supersessionist readings of Philippians hold “[the letter] presupposes a notion in which uniformity is intrinsic to the Christian movement, and, further, that the Christ movement seeks to replace Jewish identity” (p. 2).

In contrast, a post-supersessionist reading of Philippians would build upon the following four premises (taken from p.xi):

Contrary to the Old Perspective view, the coming of Christ in fact calls for “rigorous Torah obedience,” (p. 17) although this looks different depending if one is Jew or gentile. Contrary to the New Perspective, there is a place for enduring Jewish and non-Jewish identity in Christ. Zoccali holds that Paul understood allegiance to Christ as providing a “superordinate identity” (p. 5) that allowed for the continuation of previous identity.

Chapter one is an introduction that sets the lay of the land and predicts the coming argument of the book.

Chapter two traces the three “most basic premises” (p. 18) of Paul’s gospel and how these apply to the Philippians.

Chapter three begins to examine Philippians 3:1-9 and whether Paul indeed finds fault with Judaism. Zoccali considers alternative objects for Paul’s critique, but concludes that while Judaism is most likely in view, Judaism and Torah-observance in themselves are unlikely to be the target. Rather, the problem is in expecting gentile followers of Christ to proselytize. Paul instead encourages them to hold to their identity in Christ as gentiles.

Chapter four continues the treatment of Philippians 3:1-9 by examining the key interpretive points. Zoccali concludes that Paul’s focus is on the supremacy of identity in Christ, but that this identity “does not replace Jewish identity, or in any way suggest normative Jewish praxis should not continue as before,” rather, all peoples should “find their necessary superordinate identity in Christ and Christ alone.” (P. 117)

Chapter five considers the continuity and discontinuity in Paul’s gospel in regards to salvation, and the ethical implications of a supersessionistic Christian faith. As to the latter, he considers such a view as “inherently imperialistic and oppressive […] disqualifying Christianity as a liberating and ethical metanarrative.” (P. 121)

All in all, Reading Philippians After Supersessionism provides a provocative and compelling alternative to largely unquestioned readings of Philippians by the church and modern scholarship. Even if one does not agree with all, or even many, of Zoccali’s conclusions his pushbacks on both Old and New Perspectives must be noted and considered.

Buy Reading Philippians After Supersessionism from Amazon and Support MDS

Many thanks to Cascade books for providing a review copy.