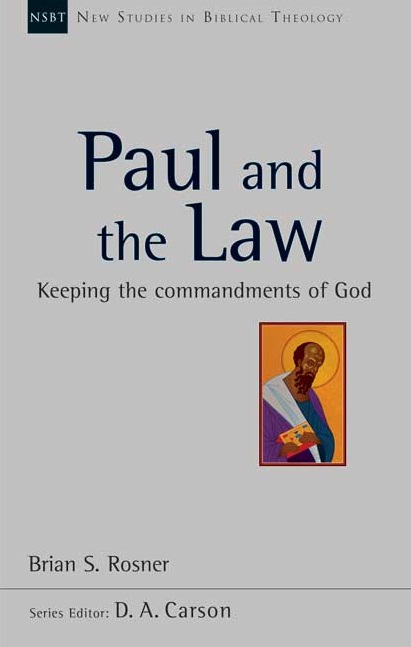 What is the Christian to do with the Old Testament law? Often skeptics accuse Christians of inconsistency and hypocricy for not following every command in Scripture and draw from the OT laws such as not trimming the edges of one’s beard (Lev 19:27) or not wearing clothes with mixed fibers (Lev 19:19). There are many other implications of how we treat the Mosaic law: issues such as law and gospel, and theological systems such as dispensationalism and covenant theology. Navigating these questions is not easy, and one could not hope to answer all in one book, but Brian Rosner has attempted to address perhaps the most important consideration, namely, Paul and the law.

Paul and the Law

Rosner’s aim in Paul and the Law is to discern Paul’s own approach and attitude towards the law. This is far from a simple topic, as Paul “present[s] both negative critique and positive approval of the law” (p24, and see here for an example). Some scholars accuse Paul of inaccuracy or inconsistency, but Rosner rightly believes that Paul had a coherent theology that he had carefully thought through in light of the coming of Christ. Rosner sees much of our confusion on the topic as stemming from our not allowing Paul to say one thing at one time. We must not only look at the individual trees, but also the forest itself.

Rosner argues that the debate has too often focused on discerning which commands (or bits) of the law Paul rejects or upholds, when instead we ought to be looking at Paul’s attitude towards the law in its entirety since he appears to treat it as one unit. So what does Paul do with the law? Rosner argues that the question ought not to be focused on which bits of the law (i.e. moral law, not ceremonial or civil), but rather the law as what. With these guiding points established, Rosner discerns three big moves that Paul makes in regards to the law:

To put it simply, Rosner argues that Paul holds that Christians are not under the law as law, they are under the law of grace and Christ. However, the law does play a significant role for Christians, both as prophecy of Christ and as wisdom for Godly living. To repeat Rosner’s claim, the issue is not which laws, but the law as what.

The book is framed around proving and illustrating how these big moves work. For the sake of space I will not trace Rosner’s arguments because they are multi-layered and deserve a close read. Instead, I’ll jump straight to my thoughts.

This book should be praised for the much-needed clarity that it brings to the notoriously muddy issue of Paul and the law. For such a tricky subject, it would be easy for a tour guide to get lost themselves, let alone safely lead anyone else; instead, Rosner forges the way ahead confidently and carefully to ensure that his leaves no one behind. The big picture moves of repudiation, replacement and reappropriation are helpful and easy to grasp, while not merely serving as an artificial pedagogical tool forced on Scripture simply to make things simpler. Once you see them, these concepts really do leap out from the text. What’s more, Rosner doesn’t overreach, he stays very close to his argument. It can be frustrating when I find myself in the middle of a multi-page argument without knowing why the author’s point is important to their thesis. Often it isn’t important, just a side-point the author wants to make. Rosner thankfully never falls into this trap.

Despite being such a complicated issue, Rosner’s big picture conclusions on Paul and the law seem obvious to me, and most that I’ve discussed this book with have agreed. It just makes good sense. Of course one who holds to a Reformed understanding of the law will find more to disagree with, but the basic ideas of Christians not being under the law, rather under grace, but with the law still playing essential roles in prophecy and wisdom – it all rings true and makes much sense of the text of Scripture. While one may not agree with each exegetical decision that Rosner makes, it is much harder to argue with Rosner’s thoughts on Paul’s big-picture moves with the law.

Another factor that makes this book persuasive and easy to follow is that Rosner ends each chapter with a paragraph with Paul’s own words, in light of Rosner’s argument. These paragraphs are drawn from Paul’s letters and really bring home Rosner’s argument, making them ‘click’ for the reader.

Chapters 5 and 6 on prophecy and wisdom were both very strong, as they helped balance out the perhaps controversial conclusion that the Christian is not under the law. Would this mean that the Old Testament, particularly the Pentateuch, is irrelevant for the Christian? Was Marcion right in dividing up the Scriptures? Rosner argues cogently that this is not the case! Paul says that Christ abolished the law, and yet the law points to Him (Rom 3:21) in a prophetic sense. Not only that, but while the Christian is not under the law as law, the law does indeed provide wise guidance for Christian living (Eph 6:1-3). Notably, Paul never quotes the law as law to address moral issues in the church, but he does quote it as wise instruction (1 Tim 5:18). These chapters are worth a close read (and re-read), particularly the chapter on wisdom, which is a very welcome and important contribution from Rosner (as an expert on Pauline ethics). The importance of Biblical wisdom is often underrated in the Christian life.

There were a few practical implications that I wish Rosner could have teased out. For example, I would have liked a little more up-close argumentation on thorny issue of sexual ethics, such as the laws regarding bestiality and incest. Often Christians will quote the Old Testament laws on these issues, but if Christians are not under the law, how are we to think on these questions when the New Testament authors do not explicitly condemn these practices? Some who teach a similar position to Rosner will hold that unless something is restated in the NT then it is irrelevant for the Christian. The double-meaning in the book’s. subtitle (keeping the commandments of God) should reassure worried readers that Rosner not would make the same conclusion. I think Rosner’s suggestion that the law still provides wisdom as it reflects God’s good order in creation moves us in a helpful direction and guards from this error. These practices are still out of line with God’s character and purposeful order in creation and as such should be avoided, not to mention the positive NT teaching on marriage as between one man and one woman.

But what of the OT laws that are not as clear, such as Lev 19:19? In what way do they provide us with wisdom? If two Christians have two different wise applications from this law, are they both valid? How do we ensure we don’t treat ‘wisdom’ as law to be followed by all? Of course by asking these questions I am now straying from Rosner’s intentioally narrow focus on Paul and the law. If Rosner’s conclusions on the big picture are correct, then it is the task of Christians to take up this framework and see how it sheds light on individual OT laws and NT texts. I look forward to doing this myself as I study the Scriptures.

Paul and the Law offers a helpful and humble step forward and is a surprisingly concise treatment of a very complex issue. A pastor or student of the Word should seriously consider this book as a clear and helpful guide. Of course, being a part of the consistently great New Studies in Biblical Theology series virtually guarantees that while it is no walk in the park it is worth the effort! Normally after reading a book on a core issue like this, I like to ponder the main points for weeks/months/years before deciding if I am fully convinced. With Paul and the Law, however, I felt thoroughly convinced of Rosner’s main thesis by the time I reached the end of the book. As I continue to study and consider this topic I may change my mind a little, but any other position would need to thoroughly address the formidable arguments here. Paul and the Law aids one in reading and understanding the Bible, particularly Paul’s teaching on the law. When a book helps one in Bible reading, it is always a success.

[Many thanks to Penny at IVP UK for providing a review copy of this book. I was not required to provide a positive review, all thoughts are my own].