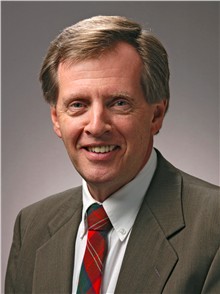 We’re continuing our series on different interpretations of Daniel 9:24-27 and this time we are talking with Dr. Robert Chisholm, department chair and professor of Old Testament at Dallas Theological Seminary. Chisholm is the author of many books, including Handbook on the Prophets.

As Daniel was reflecting on Jeremiah’s prophecy regarding the time of Jerusalem’s desolation, he prayed for the Lord to intervene on behalf of his people. He confessed the nation’s guilt and asked for the Lord’s forgiveness and for the restoration of Jerusalem. The Lord’s reply, which was immediate, assured Daniel that he had not abandoned Jerusalem. On the contrary, he had a plan for the city that he outlined for Daniel. So, the purpose of the prophecy was to give Daniel insight into the Lord’s plan for the city (and his people) and to encourage him.

I see the 70 “weeks” as a chronological sequence, but I don’t understand it as referring to a literal 490 years, as so many in my tradition do. The symbolism of 70 (multiple of seven) must also be taken into account. Most dispensationalists will choose 458 BC or 444 BC as the starting point that culminates in 483 years (or 69 weeks). Then there is a break between the 69th and 70th weeks with the final week being the seven-year tribulation period. But Daniel was studying Jeremiah’s prophecy about restoration after a period of 70 years (Jer. 25:11-12; 29:10). So I understand the decree (Dan. 9:25) as the prophetic declaration found in Jeremiah 30:18, which dates to 597-586 BC.

Most in my tradition add the seven weeks and 62 weeks together to get 69, but this is problematic. I see two distinct periods—one of 49 years and another of 62 “weeks.” The first period ends when Cyrus decrees that the city can be rebuilt in 539 BC. I don’t take the 62 weeks as a literal 434 years. It simply refers to a long period of time between the first set of seven weeks and the culminating 70th week. I don’t have the space to offer a full defense of this. For more detail, see my Handbook on the Prophets, pp. 312-17.

If your model is tightly chronological and the 70 weeks have to equate to 490 literal years, yes. Also, if Dan 9:26 refers to Jesus’ crucifixion and Dan 9:26b-27 refer to Antichrist (the ruler who is to come), then a gap is necessary in a tightly chronological system. But if one takes the 70 weeks as indicating a complete period of time during which God’s plan for Jerusalem will be accomplished, no.

The anointed one of Dan 9:26 is cut off at the end of the period of 62 weeks (which follows the period of seven weeks in the total scheme). Dan 9:26a states this.

I retain the hiphil (“destroy”) in verse 26b and understand the subject as “the people of the prince who is to come,” and the object as “the city and the holy place,” so he has to be an adversary of God’s people. The covenant must be an agreement that the coming prince makes with “many,” probably a reference to God’s people.

I actually see a dual fulfillment of this with the initial, partial fulfillment coming in 171-164. In this scenario, Onias the priest in the anointed one of verse 26, Antiochus IV is the ruler of verse 26, and the covenant is the agreement he made with the Hellenized Jews during that time. This foreshadows events related to Messiah and Antichrist. See my Handbook on the Prophets, pp. 315-16.

No, my view does not have a name or label. I’d call it “eclectic”! In addition to my Handbook on the Prophets, which I’ve referenced above (I swear, I am not trying to sell books!), my thinking has been influenced by Thomas McComiskey’s article, “The Seventy ‘Weeks’ of Daniel against the Background of Ancient Near Eastern Literature,” in the Westminster Theological Journal 47 (1985): 18-45.

Very little difference, actually. However, the overall message of the chapter encourages me, as I’m sure it did Daniel, for it reminds me that God is committed to his people and will bring his plan for them to realization, despite their sin and the opposition of enemies.

As always, I am involved in several projects.

In addition to writing Bible studies for a ministry called Coaches Outreach, I am working on a two-volume commentary on Isaiah for the Kregel Exegetical Library Series (the same series in which my Judges-Ruth commentary appears) and two commentaries on 1-2 Samuel, one for Zondervan’s Hearing the Message of Scripture Series and the other for Baker’s Bible Backgrounds Commentary.

I’m also hoping to publish books on Genesis 2-3, Job 38-42, God’s self-revelation in the Old Testament (a biblical theology proper of God based on the OT), and the hermeneutics of prophecy, as well as some journal articles. But, of course, we depend on God to bless our endeavors.

Many thanks to Dr. Chisholm for taking the time to do this interview. Expect another interview next Monday.