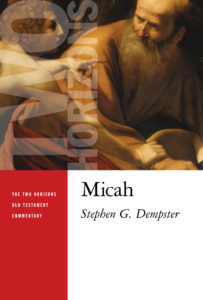 I must admit I’ve delayed writing this review. It’s not that I didn’t like Stephen Dempster’s Micah commentary; in fact, it was the opposite. I liked it so much that I was intimidated to review it (even after writing so many reviews). It’s just that good. Micah all the expected features of a commentary in the Two Horizons series. A 50-page introduction discusses usual issues such as authorship, setting, and structure as well as Micah’s placement in the Book of the Twelve (interestingly, Micah’s prediction of the temple’s destruction is at the very center of the Twelve). A 120-page commentary follows; one that somehow doesn’t feel as brief as it may look. A 70-page theological reflection concludes the commentary, in which Dempster considers Micah’s themes (e.g. justice, land, temple, messiah), contribution to Biblical theology, and contemporary relevance (e.g. cheap grace, justice, idolatry).

So far, so good. But these features are not particularly uncommon. How is Dempster’s Micah such a good commentary?

First, Dempster’s writing is exceptional in its clarity, creativity, and beauty; it was a pleasure to read. Second, Dempster pays close attention to the literary structure of the text, drawing out its own artistry and features such as word play, repetition, and sound. Third, Dempster ably weaves between historical, literary, and applicational concerns. Fourth, Dempster reads Micah theologically and canonically; that is, he reads it in light of its border theological and biblical horizons. Fifth, Dempster has some of the hardest-hitting application I’ve read in any commentary that is also thoroughly grounded in his exegesis. For example, consider the following:

One of the judgments in Western culture for the vast network of sweatshops and slave industries that supply the Western world with its goods and luxuries is the profound dissatisfaction that can be seen in the vacant faces of those walking the halls of the supermalls, zombielike, listening to the omnipresent Muzak. … When a people abandons God, the prophet comes and says, ‘You will eat but not be satisfied.’ (p. 172)

Prophetic and contextually sensitive application like this appears throughout the commentary.

If I had any critique, it would be that I found the commentary on Micah 4:1-5 a little scant. While Dempster provided his usual insight in the literary structure, I was disappointed that his section on fulfillment was not as nuanced. In Dempster’s view, “the key interpretive question is whether this text will be fulfilled in a literal fashion at the end of history in a millennium, or if it is to be understood as being fulfilled in the temple of the Christian church” (p. 130). He goes on to suggest it is the latter. However, I find this to be a false dichotomy. There are other un-discussed options, such as possible intertextuality or thematic parallels in Revelation 21-22.

Presenting the best of an already strong series, Dempster’s Micah volume in the Two Horizons series interweaves deep exegesis with sustained theological reflection. It will undoubtedly be the first Micah commentary I use and recommend for studying and teaching the book.

Listen to my interview with Stephen Dempster on Micah.

Many thanks to Eerdmans for providing a review copy. I was not required to post a positive review.