Jesus the Messiah in the Intertestamental Literature (Herbert Bateman) 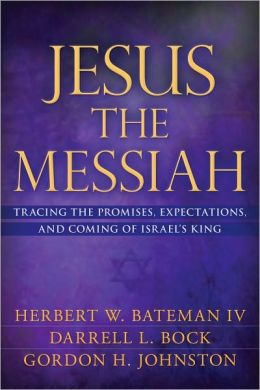 This is the third post working through Jesus the Messiah by Gordon Johnston, Herbert Bateman and Darrell Bock. Read the introduction post to get the gist of their approach to Messianic prophecy, and Johnston’s chapters on the Messiah in the Old Testament. The next section is by, Herbert Bateman on the messianic expectations (or lack thereof) in the intertestamental literature.

Jesus the Messiah in the Intertestamental Literature

Jesus the Messiah intends to “trace the concept of messianism chronologically” (p211), so it makes sense to survey what the Jewish literature between the Old and New Testaments had to say about the Messiah. Bateman has two goals in his section: 1) identify four obstacles that obscure our study of messianism in the second temple literature, and 2) observe the variety of messianic portraits in this literature.

In his first chapter, Bateman points out four obstacles (or as he says, three and then one) that must be overcome to understanding messianic expectation in the second temple period. These obstacles are:

First, Bateman does an excellent job of introducing the reader to (probably) unfamiliar texts, showing their importance, and explaining what it is they are contributing to messianic expectation. Scattered throughout these chapters are numerous tables, graphs and maps that really help keep things clear. These chapters would serve as an excellent textbook introduction to the second temple period.

Second, it becomes clear that there is no one messianic expectation; instead it is almost as if these texts take Old Testament ideas and branch them off into different paths that lead to very different destinations. Some expected a heavenly figure. Some expected multiple messiahs (priest and king, for example). Others didn’t expect a messiah at all.

There are some shortcomings in these chapters, however in approachability and editing.

First, while these chapters are very well laid out, at times the content calls into question whether Jesus the Messiah is “not intended to be an overly technical work” (p35). For example, while the history in Bateman’s first chapter was essential for what followed, there is a lot of detail that seemed irrelevant for the later chapters. Also, on page 236 there are a few sections of Greek. While the Greek is translated, it is unclear why its there in the first place, given the intended audience. All in all, Bateman’s laudible thoroughness may work against his good intentions for accessibility.

Second, I mentioned numerous typos in Johnston’s chapters and unfortunately the same is the case with Bateman’s. For the sake of space, I will only draw attention to what is perhaps the “best” editing mistake I’ve ever come across! A sentence on page 303 reads as follows.

Nevertheless, second temple reflections of Should this be capitalized?scripture and longings for a messianic “son” […]

It looks as if an editor left a note questioning if Bateman’s reference to “scripture” should be captitalized, but that note somehow slipped into the finished book.

Unfortunately, this happens again on page 327!

Yet equally grounded in Should this be capitalized?scripture is one debated and contradictory element.

Aside from the quirky editing issues, these chapters are an excellent survey of messianism in the intertestamental literature. Both those familiar and those unfamiliar will get something from these chapters.