Identifying the “I” of Romans 7

Romans chapter 7 is a treasured section of a treasured letter. The depiction of Paul in turmoil, struggling to honor God’s Law stands as a comforting testament to the plight that every believer faces. Or does it? What if this is not the correct interpretation? In teaching through Romans, I get the twisted joy of ruining this passage for my students! Not really; in fact, that’s exactly what I try to avoid doing to them. However, it’s unavoidable that they would be unsettled a little when a beloved text is challenged. What is really going on here? In the next few posts, we will use B&H’s Perspectives of Our Struggle with Sin as our guide to interpretations of this knotty chapter. In this post, I will introduce the options and the scholars that argue for them. 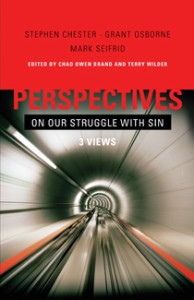 When it comes to Romans 7:7-25, the editor Terry Wilder points out two fundamental questions that one must ask:

A multiplicity of views and sub-views have surfaced from the potential answers to these two questions. Indeed, Wilder considers Romans 7 “probably the most difficult [text] in Romans to interpret” (p1)! That said, he does a fine job of summarizing the opinions, which I have adapted below:

A little overwhelming, isn’t it? Thankfully, there are three broad views and we will only look at a few.

Stephen J. Chester defends view 2.III; Paul is reflecting on his own past as a representative Jew.

Mark A. Seifrid defends view 3.II; one placed under the Law.

As to me, I used to read this passage as the Christian experience. However, after teaching through Romans a few times I am unconvinced. That said, every view seems to me to have a chink in the armor, so it will be interesting to see how these pan out.

Many thanks to B&H for providing a copy of this book in exchange for review. Their generosity has not affected my opinions.

Buy Perspectives on Our Struggle With Sin: Amazon UK / USA