Other Elohim in the Old Testament 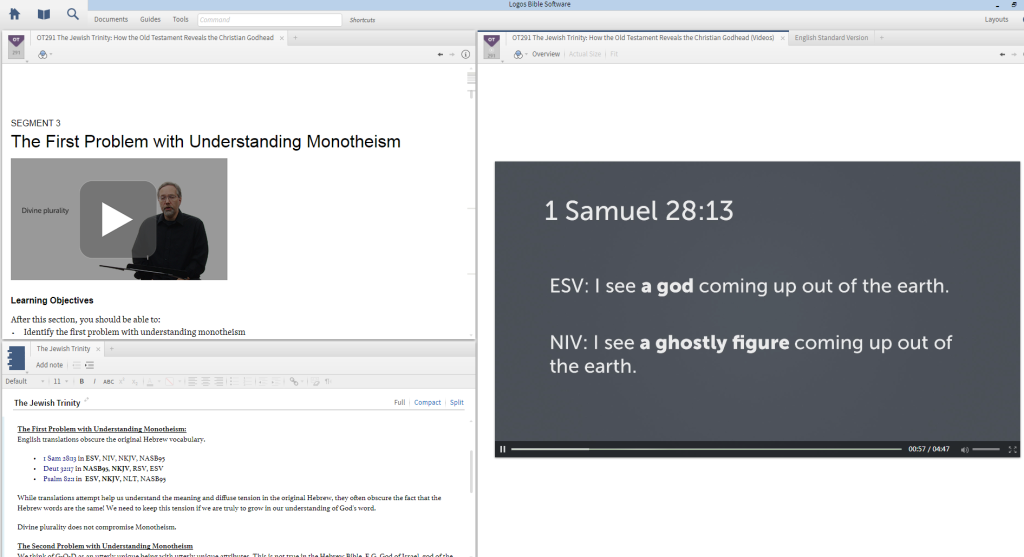 Elohim (“God”) is a name for Yahweh. So what do we do with the other elohim in the Old Testament? For example, demons (Deut 32:17), the members of the divine council (Ps 82:1, 6), and spirits (1 Sam 28:13) are all called elohim in the Hebrew Bible. If there are indeed other “gods”, then can Christians, and even Jews, truly call ourselves monotheists?

I’m working through Michael Heiser’s Logos Mobile Ed course The Jewish Trinity. Heiser begins on this provocative note not to overthrow monotheism, but to sharpen our definition of it. Heiser contends that multiple elohim is consistent with a Biblical and nuanced monotheism; divine plurality does not undermine monotheism. This is the first step towards establishing the Trinity in the OT. Not by arguing that there are three or more YHWHs, but by showing that there are divine beings in the OT other than YHWH, one sets the stage for multiplicity within the Godhead. If there is divine plurality in the spiritual realm, rather than a monolithic one-ness, then perhaps there is plurality within YHWH Himself.

Heiser identifies two obstacles that on the road to a nuanced monotheism: 1) English translations and 2) our presuppositions. I’m not going to give away everything – you will need to get The Jewish Trinity course for yourself – but we will address the former in this post.

The first obstacle to a nuanced biblical Monotheism is, sadly, our own English translations. Heiser walks through three “elohim texts” and shows how they are variously translated in English. The wide divergences between translations reveal the difficulty translators had in reconciling the text of Scripture with Christian presuppositions.

The related training video shows how Logos can be used to easily compare and contrast English translations. This is a useful guide that allows one to put Hesier’s claims to the test! I have used the Text Comparison tool to display differences between translations.

Notice also that the Text Comparison tool colour-codes the words that are different and shows the percentage of divergence with the base translation.

These texts establish a plurality of elohim in the Old Testament. Recognizing divine plurality is “just a baby step” towards showing a Jewish friend that their own Bible presents a plurality of divine beings, with YHWH remaining utterly sovereign and unique as creator of all life. If plurality and monotheism are consistent, then perhaps it is not so far-fetched to think that YHWH has an element of plurality within Himself.

Many thanks to Faithlife for providing a copy in exchange for review. Their generosity has not affected my opinion of the material.

Why is Paul Under Obligation to “Greeks and Barbarians” and Not Just “Gentiles”?