Favourite Quotes from Surprised by Hope by N.T. Wright 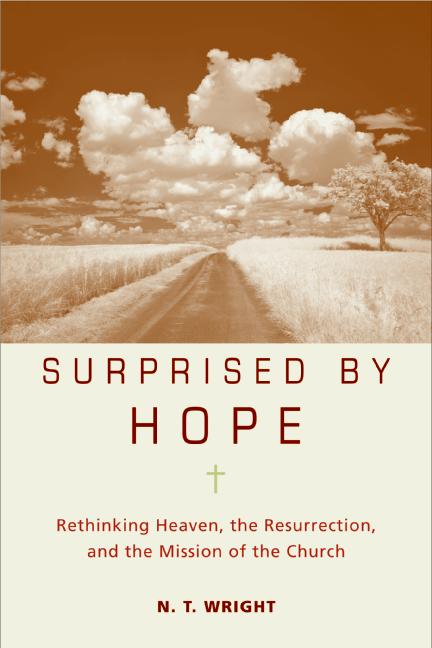 I finished N.T. Wright’s Surprised by Hope a few months ago and a review will be coming soon. One of the difficulties I had with this book, and this will be reflected in my review, is that in one paragraph Wight would climb a mountain-peak high of Biblical insight and truth, and then the very next would have Wright virtually throwing another under the bus.

Nonetheless, Wright is an excellent writer and communicator, so I thought I should share some of my favourite quotes from the book. The quotes I chose were either a) very well written, b) made an excellent point, or c) raised an interesting issue. I don’t agree with all of these quotes, but they were all stimulating.

So here are my favourite quotes from Surprised by Hope.

Quotes from Surprised by Hope

(I read the kindle version so have kindle locations instead of page numbers).

“Mostly, Jesus himself got a hearing from his contemporaries because of what he was doing. They saw him saving people from sickness and death, and they heard him talking about a salvation, the message for which they had longed, that would go beyond the immediate into the ultimate future. But the two were not unrelated, the present one a mere visual aid of the future one or a trick to gain people’s attention. The whole point of what Jesus was up to was that he was doing, close up, in the present, what he was promising long-term, in the future. And what he was promising for that future, and doing in that present, was not saving souls for a disembodied eternity but rescuing people from the corruption and decay of the way the world presently is so they could enjoy, already in the present, that renewal of creation which is God’s ultimate purpose—and so they could thus become colleagues and partners in that larger project.” — Location 3014

“As long as we see salvation in terms of going to heaven when we die, the main work of the church is bound to be seen in terms of saving souls for that future. But when we see salvation, as the New Testament sees it, in terms of God’s promised new heavens and new earth and of our promised resurrection to share in that new and gloriously embodied reality—what I have called life after life after death—then the main work of the church here and now demands to be rethought in consequence.” — Location 3096

“Salvation, then, is not ‘going to heaven’ but ‘being raised to life in God’s new heaven and new earth.'” — Location 3109

“What you do in the Lord is not in vain. You are not oiling the wheels of a machine that’s about to roll over a cliff. You are not restoring a great painting that’s shortly going to be thrown on the fire. You are not planting roses in a garden that’s about to be dug up for a building site. You are—strange though it may seem, almost as hard to believe as the resurrection itself—accomplishing something that will become in due course part of God’s new world. Every act of love, gratitude, and kindness; every work of art or music inspired by the love of God and delight in the beauty of his creation; every minute spent teaching a severely handicapped child to read or to walk; every act of care and nurture, of comfort and support, for one’s fellow human beings and for that matter one’s fellow nonhuman creatures; and of course every prayer, all Spirit-led teaching, every deed that spreads the gospel, builds up the church, embraces and embodies holiness rather than corruption, and makes the name of Jesus honored in the world—all of this will find its way, through the resurrecting power of God, into the new creation that God will one day make.” — Location 3245

“The resurrection is not an isolated supernatural oddity proving how powerful, if apparently arbitrary, God can be when he wants to. Nor is it at all a way of showing that there is indeed a heaven awaiting us after death. It is the decisive event demonstrating that God’s kingdom really has been launched on earth as it is in heaven.” — Location 3655

“The point of 1 Corinthians 13 is that love is not our duty; it is our destiny. It is the language Jesus spoke, and we are called to speak it so that we can converse with him. It is the food they eat in God’s new world, and we must acquire the taste for it here and now. It is the music God has written for all his creatures to sing, and we are called to learn it and practice it now so as to be ready when the conductor brings down his baton. It is the resurrection life, and the resurrected Jesus calls us to begin living it with him and for him right now. Love is at the very heart of the surprise of hope: people who truly hope as the resurrection encourages us to hope will be people enabled to love in a new way. Conversely, people who are living by this rule of love will be people who are learning more deeply how to hope.” — Location 4475

“Of course, in our incomplete world God’s gentle offer and demand press upon us as fearful things, almost threatening. But God’s offer and demand are neither fearful nor threatening. God in his gentle love longs to set us free from the prison we have stumbled into—the loveless prison where we refuse both the offer and the demand of forgiveness. We are like a frightened bird before him, shrinking away lest this demand crush us completely. But when we eventually yield—when he corners us and finally takes us in his hand—we find to our astonishment that he is infinitely gentle and that his only aim is to release us from our prison, to set us free to be the people he made us to be. But when we fly out into the sunshine, how can we not then offer the same gentle gift of freedom, of forgiveness, to those around us? That is the truth of the resurrection, turned into prayer, turned into forgiveness and remission of debts, turned into love. It is constantly surprising, constantly full of hope, constantly coming to us from God’s future to shape us into the people through whom God can carry out his work in the world.” — Location 4490