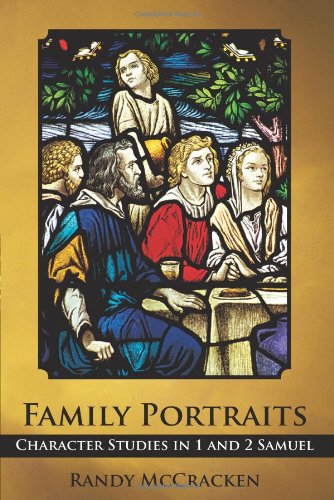 Character studies can be a mixed bag. Often the teacher will find what they want to find in a character’s story; proof-texting by means of name-dropping. Often studies will be driven by the teacher’s own agenda or fancies, moreso than a sensitivity towards the interests of the Biblical text(s). Often we will hear moralising tales not too different to “___ is bad; don’t be bad.” or “____ is good; be good too”. Alas, character studies are a dangerous game to play. So can they be done right? Enter Exhibit A: Family Portraits: Character Studies in 1 and 2 Samuel by Randy McCracken (website). Family Portraits has restored my faith in character studies being both an academic and yet devotional pursuit. The key here is that Randy has a wonderful grasp of the biblical text of 1-2 Samuel, and his numerous practical applications are driven by the text and not his own imagination. Here we will not find fanciful connections or interpretations of character’s motives, but neither will we find dry academia for academia’s sake. These two pitfalls are cancelled out through Randy’s tightrope-walking performance.

The purpose of Family Portraits is to examine the lives of various secondary characters in the text of 1-2 Samuel and see what the text tells us about these characters and how it would apply to ourselves. By secondary characters, I mean that one will not find Samuel, Saul or David, but rather Abiathar, Michal, and Joab. Randy traces four various family lines – Samuel, Eli, Saul and David – and highlights characters that are prominent enough for mention. This results in twenty-five character studies.

To give an example of how the scholarly sits alongside the pastoral, I will share a few insights from a representative early chapter on Eli.

In Samuel, Eli plays a negative role overall and the nuances of the text draw this out in several ways:

As you can see, this is a study from getting one’s hands dirty with the text of Samuel itself, and not mere speculation. The narrator wants us to see Eli as a negative example of weightless glory, and a close reading of the text draws this out. This is characteristic of Randy’s work throughout the book.

Family Portraits is a book from which anyone could benefit. There is deep study with numerous footnotes, but there is also a proliferation of personal applications drawn from the text. A or teacher pastor could pick this up and it would easily aid them in their study of 1-2 Samuel, but any interested believer could also read this alongside daily Bible reading.

At this point I must confess that I may be a little biased since Randy McCracken is a fellow-teacher at Calvary Chapel Bible College York, my wife put together his family tree graphics, and that I have written this blog post under the threat of a ruptured friendship*. However, I can wholeheartedly recommend Family Portraits, and my own friendship with Randy only enhances my appreciation for this book and desire to build up believers though his scholarship.

* I was only kidding about my obligation to write this post (right, Randy?)…