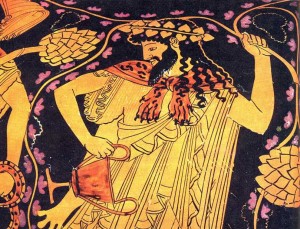 I ran across a unique understanding of Ephesians 5:18 when reading Clinton Arnold’s Powers of Darkness. He referenced a paper by Cleon L. Rogers, Jr entitled The Dionysian Background of Ephesians 5:18, wherein Rogers argues that Paul’s comments are specifically addressed to drunkenness that took part in the worship of Dionysus.

Possibly the drunken and frenzied revelry connected with the worship of the god Dionysus, the god of wine, forms the general cultural background of this statement. The first-century readers were called to turn their backs to alcoholic intoxication and inspiration from any other spirit or deity (such as Dionysus) and yield themselves completely to the Holy Spirit of God.

Rather than a contrast (or comparison, as some Christians see this verse) between the behaviour that comes from the Spirit’s filling and that of drunkenness, Roger’s understanding also includes a direct forbidding of idolatry and association with other spirits. This would fit themes in Ephesians, the cultural context of Ephesus itself, and explain the otherwise seemingly arbitrary mention of drunkenness (why not another sin?).

Judging by Arnold’s comments in his recent Ephesians (ZECNT) commentary, he seems less intrigued by Roger’s view than before. Admittedly, Paul’s comment here is too little to go on in forming a conclusion. However, Dionysian practices certainly inform the background of the Ephesian culture and were a constant temptation of the “old ways”, whether or not Paul was specifically referencing them in Eph 5:18. It’s intriguing nonetheless.

And do not get drunk with wine, for that is debauchery, but be filled with the Spirit. — Eph 5:18

Have a read (it’s only 8 pages), judge Roger’s arguments for yourself, and comment below!