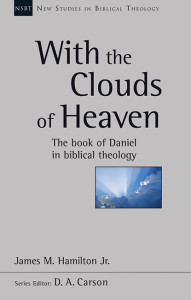 Hamilton is not the first to argue for Daniel having a chiastic structure. Many have noted the similarities in at least the first 3 bullet points above, and posited a partial chiasm of Dan 2-7. Others have attempted to fit the entire book into a chiasm (or two, like Steinmann), but they disagree on the details and miss some of the parallels above. What’s strong about Hamilton’s suggestion is both the simplicity and the recognition of larger-scale parallels. Here is his structure:

1. Exile to the unclean realm of the dead

2. Four kingdoms followed by the kingdom of God

3. Deliverance of the trusting from the fiery furnace

6. Deliverance of the trusting from the lion’s den

7-9. Four kingdoms followed by the kingdom of God

10-12. Return from exile and resurrection from the dead

Hamilton shows that this structure allows one to “put the message of Daniel into one sentence”:

Daniel encourages the faithful by showing them that though Israel was exiled from the land of promise, they will be restored into the realm of life at the resurrection of the dead, when the four kingdoms are followed by the kingdom of God, so the people of God can trust him and persevere through persecution until God humbles proud human kings, gives everlasting dominion to the son of man, and the saints reign with him (p83)

Hamilton even takes this structure and notes its similarity to Revelation, which he also considers to be chiastic. Has John intentionally structured his revelations to be somewhat parallel to Daniel’s structure? This is worth considering more.

Hamilton compellingly argues for this structure, though I’m unsure about separating chapters 10-12 from 7-9 since they cover the same time periods. Perhaps chapter 1 should be subsumed under 2? Anyway, to understand the logic behind the whole thing, you’ll need to read With the Clouds of Heaven, which is an attempt at reading Daniel in light of what comes before him and after him (Biblical theology).

Be on the lookout for my review this Thursday.