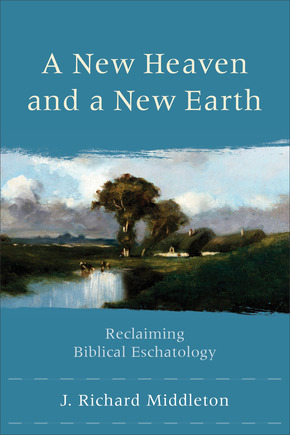 Many in the church today are deeply entrenched in a thoroughly unbiblical mire. Not only are we unaware of this, but for many it is absolutely central to the expression of their faith. We sing about it in our worship songs (and even classic hymns!). Our pastors preach it fervently from the pulpit. We use it as the central point of our evangelistic appeals. It even infiltrates our reading of the Bible to such a degree that we are blind to the Bible’s own words screaming out in protest. What is this doctrinal mire? It is that Christianity is about being freed from this earth and going to heaven when we die (or preferably before). In other words, it is an ignorance of God’s plans to place resurrected people in a resurrected world. J. Richard Middleton is not the first to point out that this doctrine is unbiblical, but in A New Heaven and a New Earth he has presented perhaps the most comprehensive attempt to pull us out of its miry depths.

A New Heaven and a New Earth

Middleton begins A New Heaven and a New Earth by showing how deeply the church has become mired, owed more to Platonic dualism than a Biblical worldview. The rest of the book sets forth a systematic deconstructing of this idea and recovering of Biblical teaching.

Chapter two addresses an important question: what was God’s original plan for creation? Humanity was to worship God through living out our calling: being truly human. What does it mean to be in the image of God? In the Ancient Near East, kings and sometimes priests were understood as bearing the image of a god because they mediated the god’s presence and extended his rule. In contrast, the Bible says that YHWH gave this calling to all humanity. The true God intends for all humanity to embody His dominion over creation, following the pattern of His own servant-rule. The fall and curses do not overturn this original calling, as seen in the culture-expansion recorded in Genesis 4 (although, if this activity is entirely positive then I wonder why Genesis 4 only records Cain’s line doing this?).

In chapter three, Middleton rightly argues for a macrostructure to the Bible. Every story has tension that needs to be overcome to bring the characters to their intended goal. This goal is bringing us back to the good beginning in Genesis 1-2. Upon recognizing this plot, heaven “has no intrinsic role as the final destiny of human salvation” (p72).

The next two chapters establish how the Old Testament presents a holistic vision of salvation in the exodus and giving of Torah. If the exodus is the paradigm of salvation, then salvation should not be abstracted. This is where Torah and wisdom come in; God saves us in order to instruct us how to be truly human. This helps make sense of “works” as “human flourishing”, an intended goal of salvation.

Chapter six is a needed preemptive strike of sorts, explaining that OT “end of the world” imagery used for God’s judgment and salvation. He surveys a number of texts and explains that we misread the Bible if we read apocalyptic texts to communicate a literal destruction of this world.

In chapter seven, the connection between resurrection and rule is unpacked in texts such as Daniel 7, Daniel 12, Second Temple Literature, and Hebrews 2:6-8.

Chapter eight reaches the heart of the book. Middleton argues that the whole created order will be redeemed by surveying five texts (Acts 3:19-21; Eph 1:9-10; Col 1:19-20; Rom 8:19-23; 2 Peter 3:10-13) and asking two questions: “how is salvation described” and “what is the recipient of this activity?” These texts all show that creation is included in God’s salvific work (without teaching Universalism). This chapter is worthy of close reading and rereading. All minds need to be soaked in this vision.

Chapters nine and ten have Middleton swatting aside two common objections. First, what do we do with the passages that seem to portray universal destruction when Jesus returns? No passage “imply[s] the eradication of the cosmos” (p184). 2 Peter 3 gets the full treatment that it deserves. Second: what about heaven; what role does heaven play? Surprisingly, Middleton argues against an intermediate state, saying that texts such as John 14:1-3, Phil 1:23-24, and 2 Cor 5:6 do not speak of “going to heaven when we die”. That is, there is no intermediate state. However, Middleton concludes that this is not central to his argument.

The final two chapters unpack the ethical implications for this holistic salvation in the book: “we cannot separate eschatology from ethics” (p273). That is, we cannot perpetuate this world as a sinking ship and our mission as getting people onto lifeboats. These chapters are necessary, and I am very glad he didn’t make the mistake of N.T. Wright by getting over his head into specific political and economic strategies.

Before I end the book in praise, I must register three complaints. These are relatively minor in comparison to the book’s qualities and should not dissuade the readers, but are worthy of note.

With those points out of the way, all I am left with is praise. Middleton’s writing is tremendously clear and I am in awe of his ability to clearly navigate such a wide swathe of (often complicated) Biblical material and leave no one behind in the process. It is both thoroughly Biblical and thoroughly readable. This is wonderful as it allows these ideas to be placed into as many hands as possible. That is not to say that this is easy reading, this book could shake you to your core.

The label “game changer” should not be thrown around hastily, however I believe A New Heaven and a New Earth has the potential to be this very thing for many Christians today. Even those who are familiar of these ideas by means of others such as N.T. Wright and G.K. Beale will appreciate a comprehensive (holistic?) presentation of the Bible’s new creation focus. I hope that A New Heaven and a New Earth gets the attention that it deserves and that all Christians recover and embrace its message. This book contains is a well-argued, approachable, and timely appeal to the church to reclaim its holistic eschatology, and as such is one of the most important books of last year, if not the last decade or two.

This book was provided by Baker Academic in exchange for review. Their generosity did not affect my opinions of the book.