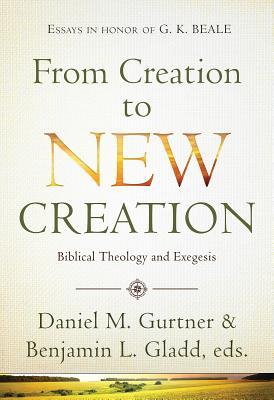 I’m highlighting a few essays in From Creation to New Creation (a tribute/fenschrift to G. K. Beale); not necessarily those I think are objectively superior, but rather stood out to me as interesting and post-worthy.

Why Samson May Not Have Visited a Prostitute

Gordon P. Hugenberger, who is producing a commentary on Judges for the Apollos OT series, argues against the scholarly consensus – much like Samson taking on a multitude of Philistines – by making a case for Samson not visiting a prostitute in Judges 16:1-3. More than simply arguing against seeing this as another conquest of Samson’s unchecked libido, Hugenberger makes an interesting case for a positive reading of this event. I’ll detail the argument below and why it matters.

Similarities With Joshua 2 and Judges 18

Hugenberger’s case relies on recognizing parallels between Judges 16:1-3 and two similar events that carry no sexual connotations: Joshua 2 and Judges 18.

Similarities between Joshua 2 and Judges 16:1-3:

Similarities between Judges 18 and Joshua 2:

So What Was Samson Doing There?

Considering the similar accounts, perhaps the key is in asking “what were the spies doing there?” It’s unlikely that they were after intel that “could be incorporated into the eventual strategy that supernaturally caused the walls of Jericho to tumble” (p73)! Hugenberger considers the possibility that the Canaanites were involved in cultic prostitution and that the spies were confirming that the inhabitants sins had reached full measure (Gen 15:16).

Perhaps this is why Samson visited the prostitute in Judges 16; for similar reasons as his actions in Timnah (Judg 14:4, 15).

The actions of the spies in both Joshua 2 and Judges 18 serve as comparisons and contrasts with Samson’s actions:

“While the Danite spies fail to follow the pattern of Joshua’s spies, the author of Judges suggests that the faithful Danite, Samson, who alone remained behind when the rest of his tribe had abandoned their inheritance, was replicating the stratagem of the spies meticulously.

Much like with a friend that constantly disappoints, perhaps we have been too quick to judge Samson and assume the worst? I will need to give this further thought, so comments are welcomed! I must say that Hugenberger’s essay gives a much stronger case than my summary, but the basic frame above is a good starting place. For this excellent essay and others, check out From Creation to New Creation.

From Creation to New Creation: Amazon US / UK