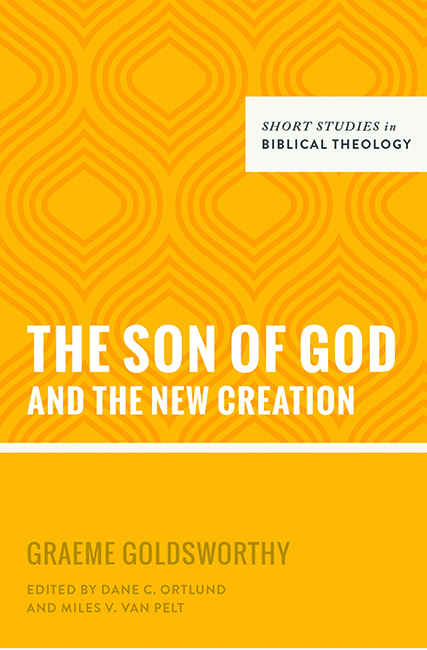 If “Son of God” simply means that Jesus the second person of the Trinity, then what about all the other “sons” in the Bible such as angels (Job 38:7), Adam (Luke 3:38), Israel (Ex 4:22), Israel’s kings (2 Sam 7:14), and believers (Rom 8:14)? When I teach my session on Jesus as Son of God, I begin with this question and it is met with blank stares and the faint smell of cogs burning. The purpose of this story is not to imply that I have particularly dense students; far from it! However, the simple question catches one off guard. I was raised in Bible-teaching churches but wouldn’t have been prepared for this question either. So why the disconnect? Have we completely misunderstood what “Son of God” means in the Bible? Have our creeds and confessional statements led us astray? The Son of God and the New Creation, the flagship of the new Short Studies in Biblical Theology series from Crossway, probes these very questions. Seasoned Biblical Theology virtuoso Grame Goldsworthy is not the first to do this, but this book is unique in that it is aimed at everyday believers (p11).

The Son of God and the New Creation

In The Son of God and the New Creation, Goldsworthy aims to “investigate the title “Son of God” and other related sonship titles in order to deepen our appreciation of the person and work of Jesus of Nazareth” (p20). With the profusion of Son of God and plethora of related titles, it is easy to get lost. Where would one begin? Goldworthy lays out his “gospel-centered” approach of starting with Jesus “since we begin our Christian journey by coming to faith in the person and work of Jesus” (p24). This approach is as follows:

This book has numerous strengths. Particularly, I think Goldsworthy is right to draw upon the Old Testament resonances and their significance. Each occurrence of the title is but only the tip of an iceberg of meaning. There is so much under the scenes that is missed without the OT grounding,. I would wish that every believer becomes familiar with the OT development of the theme from Adam to Israel to the Davidic line. It helps us understand the Old Testament better, grounds Jesus in the OT, and clarifies tricky passages (such as Rom 1:3-4). What’s more, our status as “sons of God” is profoundly richer with this OT background.

In terms of insights, I was pleasantly surprised by the many connections of the title to the New Creation, not having seen them before. Also, Goldsworthy is helpful in explaining the difference between Jesus as the Son of God and Jesus as God the Son. These are not the same thing!

This Jesus-first approach has much to commend due to the lamentable “difficulties many Christians have with the Old Testament” (p38). By beginning in familiar territory, the study is less overwhelming. However, I suspect this approach has led to a few missteps due to the NT guiding the reading of the OT. Of course the NT illuminates the OT, but sometimes we can misread the NT by not allowing our reading to be informed by proper OT foundations. We must both read backwards and forwards.

The primary example I have in mind is the dismissal of heavenly “sons of God” as irrelevant to the discussion. I suspect this is due to his Gospels-first approach missing the significance of the angelic OT background to statements in the Gospels. In Goldsworthy’s words, “whatever the significance of angelic beings referred to as sons of God, the title as applied to Jesus is too heavily anchored to the line of Adam-and-then-Israel for these references to greatly influence our understanding of his sonship” (p64). This either/or attitude neglects one important stream of data. Thus, angelic sons of God are not addressed. What if Adam’s sonship is indeed linked in some way to angelic sonship?

Goldsworthy recognizes that Jesus exceeds the human definition of Son of God (seen most clearly in John), so could it be that the angelic beings recognize this deeper meaning? Jesus is only referred to as the “Son of the Most High” by angels (Mark 5:7; Luk 1:32, 35; 8:28). I would argue that this is significant, as this specific title is used in the OT to refer to members of God’s heavenly council (Deut 32:8; Psalm 82:6)! Could it be that the angelic beings identify Jesus’ heavenly preexistence by their use of the title? Could this illuminate more fully why Jesus is known as God’s unique Son (John 3:16)? That is, He is different from other heavenly beings known by that title, just as YHWH is different from all other Elohim, despite sharing the title. This ‘heavenly’ meaning would lessen the distance between John’s divine use of the title and the Synoptics’ “predominant view” (p49) of the title being tied only to Adam, Israel and David. This could also have implications for the application of the title for believers, especially in Rom 8:19 where our glorification is recognized as an unveiling of our status as sons of God. In the new creation, we will be higher than angelic beings (Heb 2:6-7; 1 Cor 6:3). Perhaps this is directly tied to our revelation as sons of God? Admittedly, this critique should be tempered by the fact that Deut 32:8 and Ps 82 are debated and that I’ve not run into this connection much elsewhere.

More problematic is the reading level. Given that the series claims to be “written by a capable scholar or churchman who is consciously writing in a way that requires no prerequisite theological training of the reader” (p11), I was surprised by the inclusion of Greek (transliterated), technical jargon (though some is explained in the few footnotes), and most strikingly, Goldsworthy numerous rabbit-trails. It will require a concentrated reader to avoid getting lost. Speaking personally, I found the train of thought difficult to follow, and I read academic works for fun that are much more rigorous! In one memorable example, Goldsworthy begins by listing four ways that “son of God” is used in literature prior to the NT, but then proceeds to discuss the purpose of the New Studies series and the coherence of Scripture. From there, I tried in vain to find where the original thread resumes! I found my opinion confirmed by the recent Gospel Coalition review.

In my review of D.A. Carson’s excellent Jesus the Son of God, I lamented that it was not a larger work that covered all the uses of the title. Although The Son of God and the New Creation is similarly-small, studying this concise but wide-ranging book will reap inordinate fruit. One will never regret working through a Christological theme as it opens our eyes to the entirety of Scripture. However, this will require concentration, as Goldsworthy’s prose and diversions undermine the clarity and approachability of the work. The desire of the editors is that “any thoughtful Christian disciple can track with and benefit from these books” (p11). Unfortunately, I am not as optimistic with this book; hopefully future books will rectify this shortcoming, as it is incongruous with the series’ stated intention. If one is persistent, it will be a fruitful effort.

Many thanks to Crossway for providing a digital copy of this book in exchange for a review. Their generosity has not affected my opinion of the book.