Over the past few weeks I’ve been working through Michael Heiser’s The Jewish Trinity and posting snippets as I go, but in this post I will give some concluding thoughts and review the whole enchilada.

For those who have not been following my posts on the 4-hour The Jewish Trinity Logos Mobile Ed course, the basic goal is establishing a Godhead by reading the Old Testament on its own terms. This latter point is essential. Heiser wisely avoids anachronism and proof-texting that only convinces the convinced; instead, he takes an intellectually honest approach that even a faithful Jew could hear.

Heiser begins by establishing a Biblical definition of monotheism – one that incorporates the OT’s own recognition of “divine plurality”; that is, the existence of elohim other than YHWH. Since the idea comes as a surprise not only to Jews but even Christians, he spends significant time establishing this from texts such as Deut 32:8-9 and Psalm 82. If divine plurality within the Old Testament itself can be established, then the Jew can perhaps overcome the hurdle of the Schema (Deut 6:4) to accept the Christian doctrine of the Trinity. Heiser also takes a few segments to respond to texts that appear to deny the existence of other gods (e.g. Gal 1:8-10; 1 Cor 8-10).

With this foundation in place, Heiser begins to show that the Old Testament in fact presents plurality within YHWH Himself. What’s more, Second Temple Judaism in fact recognized these texts and concepts. There is evidence that they wrestled with the identity of this “second YHWH”, positing different characters to fill the role such as angelic beings or exalted humans. Heiser then illustrates that when describing the relationship between YHWH and Jesus, the New Testament clearly draws from this pool of ideas in the Old Testament and in Second Temple literature. This foundation of divine plurality helps explain how early Jewish Christians would rather die than worship Caesar, yet happily worshiped Jesus: He is this “second YHWH”!

Beyond the identity of Jesus and the Father, there are also “seeds” of a full-blown Christian Trinity planted in the Old Testament. Texts such as Isaiah 63, Psalm 78 and Ezekiel 8 hint at a shadowy relationship between YHWH, His Angel, and His Spirit. This relationship is then picked up and expanded in the New Testament revelation. Lastly, Heiser applies his Jewish / Old Testament Trinity teaching to the Jehovah’s Witnesses, Mormons, skeptical academics, and Jewish evangelism. 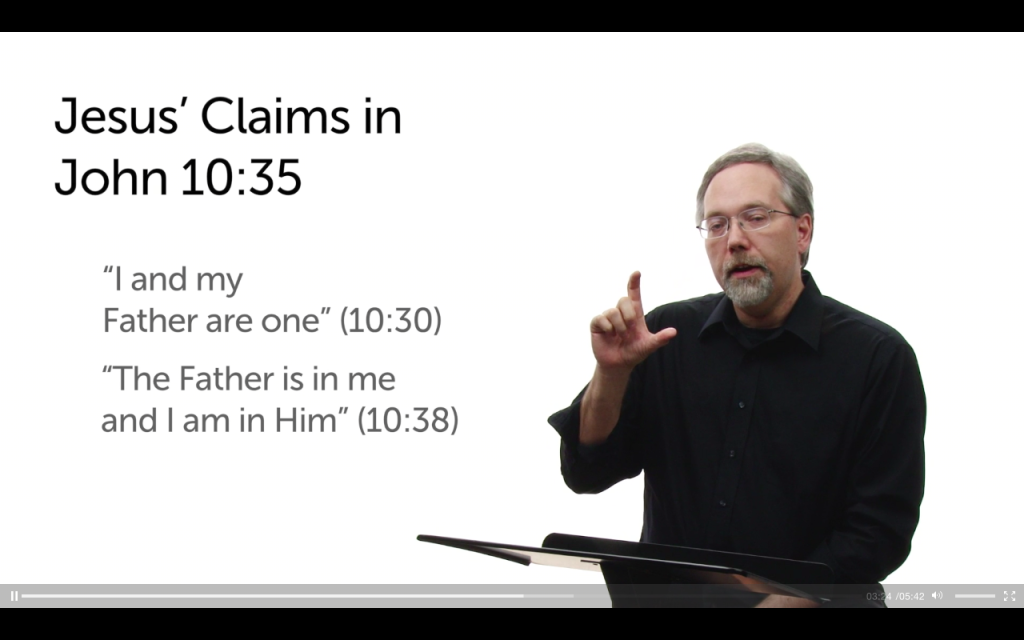 Scattered throughout the course are suggested readings for further study, 8 quizzes, and 10 Logos training videos that relate to Heiser’s teaching. For the most part these are relevant and even incredibly helpful. The videos are especially useful as they equip the student to follow up on some of Heiser’s assertions. I found one oddity in the suggested reading, however. After Heiser set forth his vision of a more nuanced monotheism, the suggested reading for that section seemed to contradict all the work that Heiser just did! By its definitions, it implied that Heiser’s view is in fact henotheism. This could confuse the student, and perhaps Heiser could have clarified his own view regarding henotheism in the course.

Since I have the Silver Logos package, I was not able to access all of the reading. In my last review, I criticized the “required reading” not being included in purchase of the Mobile Ed course. However, I noticed that the reading in this course is now “suggested” rather than “required”. I suppose Logos made this change to so that a user with a lower-tier package (Bronze/Silver) will not feel as if they are missing out on something essential if they don’t have everything referred to in the course. 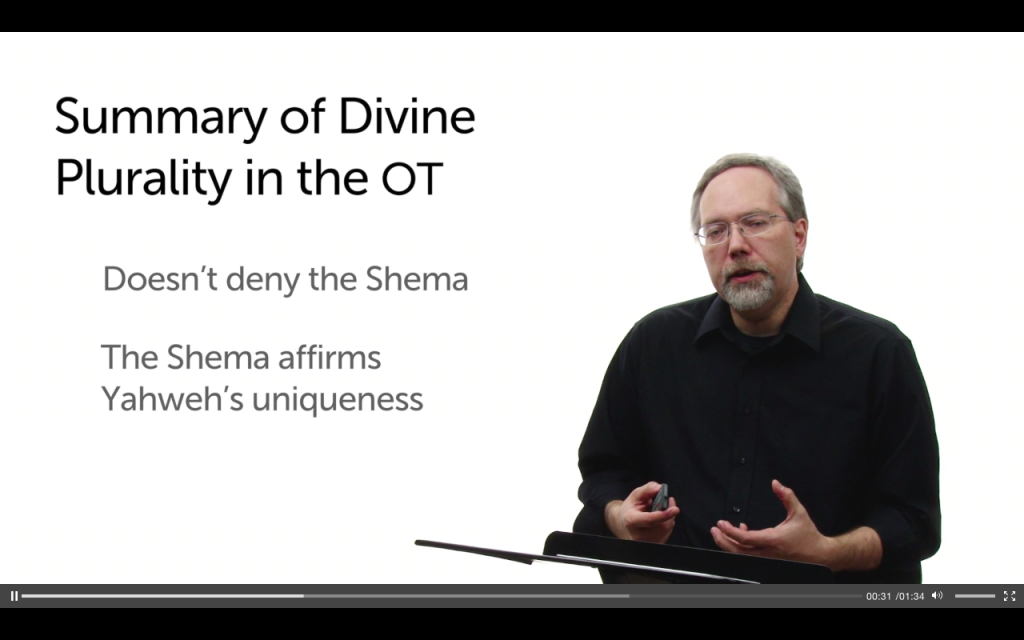 Since the course is labelled as The Jewish Trinity, I do wonder if some students will be disappointed that Heiser spends little time on the Holy Spirit, while the Biblical material on other elohim takes up a large chunk of course time. I do understand his logic, but practically the course could have been labelled (admittedly less-catching) The Jewish Binity. Of course, the Holy Spirit plays a more “humble” role in the Bible, so there’s only so much Heiser can do.

Perhaps most problematic in this otherwise outstanding course is the presentation. In my previous review of John Walton’s Old Testament Genres, I commented that due to the stark visual style, one’s entertainment level will fluctuate due to the varying charisma of the speaker. While I found Heiser’s content ever-fascinating, his visual presence was less stimulating than Walton’s. Where Walton stands, looks at the camera, and expresses himself visually through hand movements and smirks, Heiser sits behind a stand, looks down at his notes (or iPad?), and is considerably more reserved. An anecdote may illustrate the point. I used some Mobile Ed video segments in a recent Bible College class and a few students remarked that Heiser appeared to be falling asleep! Clearly, they were humorously exaggerating the point but there was a real complaint behind the joke. I say this not as personal attack – Heiser is a good teacher and shouldn’t be criticised for being himself – but rather, depending on the context in which these videos are used, this could be an issue. Youth groups may want to look elsewhere (but hey, if you were thinking of using these in your youth group, then I wish I were 14 so I could join!).

This course was truly excellent and stimulating. I admire Michael Heiser’s unique ideas, relentless drive for fidelity to the Biblical text, skill at clearly presenting difficult and unfamiliar concepts, and bravery in presenting controversial, but Biblically-rooted, ideas to the church. This course is a perfect example of these qualities. Heiser makes a very compelling case for Old Testament Trinitarian ideas that not only rubs against the grain of scholarship, but even the broad sweep of evangelical Christianity. Many Christians are ignorant of, or reject, divine plurality. Many also reject an Old Testament Godhead and instead see the Trinity as a New Testament idea that exploded, big-bang-like, in retrospect of Jesus’ ministry and apostolic teaching. Heiser’s The Jewish Trinity is a welcome and stimulating counter-case for a Godhead firmly grounded in the Old Testament.

Faithlife graciously provided a copy of The Jewish Trinity in exchange for review. Their generosity has not affected my opinion of this material.

Buy The Jewish Trinity from Faithlife