The Drama of Scripture 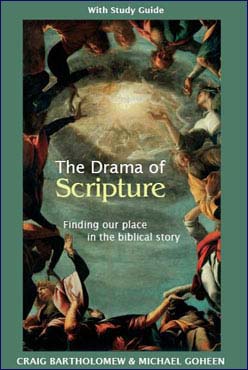 Everyone is drawn to a good story, yet many are unfamiliar with the story that we actually live in! The Bible tells the true story of redemption, and authors Craig Bartholomew and Michael Goheen have attempted to bring a wider attention to this in their book The Drama of Scripture.

In the words of the authors,

“We have written this book to tell the biblical story of redemption as a unified, coherent narrative of God’s ongoing work of salvation” (ix)

I am reviewing the UK adaptation, which has been streamlined to better serve as a study tool for churches. Changes include reduced content, removal of most footnotes, and new sections with contemporary significance. I have no familiarity with the US version so it will not factor into my review.

For what it attempts – tracing the Biblical storyline and finding our place within it – this book largely succeeds. The authors are very competent at clearly summarizing larger sections and themes of Scripture; it’s impressive to find the Biblical story condensed to 167 pages! Secondly, the reader is constantly presented with practical implications drawn from the text, along with probing discussion questions at the end of each chapter. The authors are clearly passionate about showing the relevance of the Scripture today.

The drama of redemptive history is helpfully presented in six major ‘acts’ with an interlude.

This is a helpful teaching tool to keep the reader aware of which point in the story they have reached. The standard “Creation, Fall, Redemption, Restoration” formula has been tweaked with the addition of ‘Israel’, an interlude, and a ‘Church’ section; each is welcome and adds balance.

By trying to trace the Biblical storyline in a small introductory book, things must be left out. This is unavoidable so grace and understanding must be shown to any who take on such a task. Unfortunately, several important themes were not given the attention I believe they ought, and in some cases were neglected entirely.

For an introductory book to the Bible, there are a few odd statements.

Here are a few areas where I see misplaced emphases. The seriousness of these depends on how one sees their significance.

Laying my concerns aside for a minute, Bartholomew and Goheen should be commended for seeking to put the Bible together as a unified whole. Too many in the church today only read the Bible piecemeal for a ‘daily word’, or neglect whole sections of the Bible or the Biblical storyline itself. For such a difficult task, the authors do a very good job.

Do I recommend this book? If it weren’t for my concerns above, this would be a great book for those looking for an introduction to the Biblical storyline. Since The Drama of Scripture is intended as for churches to use in small groups and the like, personally I would look for elsewhere for a similar resource.

Of course, what is emphasized and what is left out to some degree reflects the theological viewpoints the authors, and the same applies to my criticism. Some will not be worried by my concerns, and if that is the case, I would certainly recommend this book to them.

[Many thanks to Hannah Fox and SPCK Publishing for providing a review copy of this book!]

Paul and the Law: Brian Rosner