Religion and Rome in Paul’s World 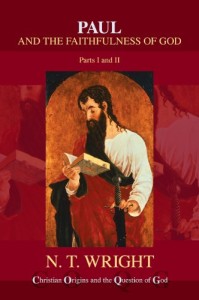 I’m continuing my walk through Wright’s Paul and the Faithfulness of God and for the sections on religion and Rome I have nothing really to say. The chapters were very good and I have much to think about, just nothing really to report. So I will leave you with some choice quotes.

Having finished the first ‘part’ of this four-part book, I’m now taking a break since our Spring semester will be starting with February and I’ll be elbow-deep in work with no promises for returning to this until the Summer. I expect to return sooner, but we’ll see.

What we can call, loosely and heuristically, the ‘religion’ of Paul’s world was not set apart from the rest of ancient culture. On the contrary: it was its beating heart, with every part of the body politic related to that heart by active and throbbing blood vessels. If the world was full of gods, the world was also therefore full of religion, full of cult; full of a god-soaked culture.

A major effort is needed to appreciate the readiness with which a first-century inhabitant of the Greco-Roman world would pick up allusions to Achilles, to Odysseus, to Hercules, to Orestes, to tales of the Trojan War and its aftermath. They knew these stories as well as today’s western culture knows the present state of various soap operas, or indeed film franchises such as Batman or James Bond, or the present marital dilemmas of the leading film stars.

We must never forget that for the ancient world the power of tradition, of ways of life long established and handed down, was very strong. Exactly unlike much of today’s western culture, the word ‘old’ implied high praise, while ‘new’ carried both a moral and a social sneer. Hence the ambiguity, even in Socrates himself: you might question every- thing, you might challenge every possible presupposition of social, cultural, moral and civic life, but when all is said and done you still owe a cock to Asclepius.

The philosophical critique, then, which we looked at briefly in the previous chapter, consisted more of intellectual questioning about the tradition rather than the attempt to overthrow the tradition altogether.

Some Jews served in his armies, and for this and other reasons he conferred on some of them the grant of Roman citizenship. That, we may assume, is the likely route by which the father or grandfather of Saul of Tarsus acquired that citizenship which, according to Acts at least, played such a significant role in Saul’s later public career.

When Paul speaks of the Thessalonians turning away from idols to serve a living and true god and to await the arrival of his son, it would be very strange if he had not meant to include Roma and the emperor among those false deities.221 When he speaks of Jesus’ parousia, there is good reason to suppose that many in Thessalonica would have had in their minds the picture of the emperor arriving for a state visit, or perhaps returning to Rome after his extensive travels.222

Saul of Tarsus, born and bred a Pharisee in a world shaped by the wisdom of Greece, the religion of the east, and the empire of Rome, came to believe that Jesus of Nazareth was Israel’s Messiah and the world’s true Lord, and that this Jesus had called him, Saul, to take the ‘good news’ of his death, resurrection and universal lordship into the world of wisdom, religion and empire.

Well, that brings us to the end of this section. Next is devoted to Paul’s mindset, and we’ll look at that eventually!

[Many thanks to SPCK for providing a copy of this book for review. I was not required to give a positive review]

Recommended Books on Christ and the Cross: Part 2

My Digital Seminary for Spring 2014