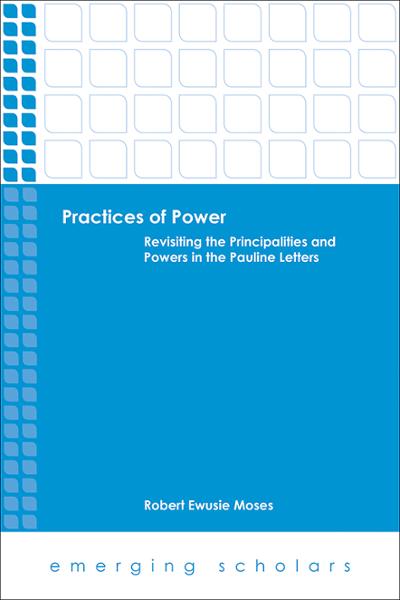 As I mentioned in my introduction, I’m working through Robert Ewusie Moses’ book on Paul’s prescribed practices in regards to powers and principalities, Practices of Power. This is the first post and the first practice is baptism.

Moses begins with a study of Romans 5-8, particularly chapter 6. I cannot hope to summarize the whole discussion in this chapter, but let me say that it is thorough! What I’ll do here is simply unpack his main point and offer a few comments along the way.

The first practice we encounter is that of baptism. Perhaps you are already getting uncomfortable. Baptism is spiritual warfare? What of those who are not baptized? Exactly. But let’s not get ahead of ourselves. We need to begin with Paul via Moses (not that Moses).

Moses begins by arguing that in Romans 5-8 Paul has Psalm 19 in the background of his thought. Psalm 19 is itself a poetic meditation on Genesis 1-3 (based on this article from Clines). Interestingly, “presumptuous sins” in Psalm 19:13 is translated in the LXX as “strangers”, and Moses says we should recognize them as demons based on word usage elsewhere. So the psalmist prays to be free from the power of demonic forces.

All that to say, a number of connections exist between Psalm 19 and Rom 5-8, with the latter’s emphasis upon the powers of Sin and Death. These concepts are personified by Paul, hence the capitalization of “Sin”. These Powers have enslaved humanity since Adam, and yet Christ has accomplished a way out. “Because Christ died he is no longer under the power of Sin (Rom 6:10); and because Christ was raised from the dead, he is no longer subject to Death (Rom 6:9)” (p58). Through Christ’s death and resurrection, these Powers have lost their, well, power.

Though not a sinner and thus deserving death Himself, Jesus was freed from the realm and power of Sin and Death through His death and resurrection. He can now lead others out of this sinful and deathly age and into the age to come.

That’s all well and good, but how do believers experience this victory too? They need to be “mapped onto Christ’s trajectory; they must participate in Christ’s ‘career'” (p58). To be free of Sin and Death, believers must also die and rise again; and to do that they must partake in Christ’s own death and resurrection.

So how do we do that? The answer is baptism, “the means through which believers participate in Christ’s career (Rom 6:3-4)“ (p59). Through reenacting Christ’s experience in baptism, believers die Christ’s death and even experience His resurrection now (and not yet), thereby being free from Sin and Death. The new creation (aka. resurrection) has already begun in our new birth and the presence of the Spirit in our lives. So believers truly are released from the dominion of Sin and Death, yet they await these Powers’ final destruction to experience complete freedom from their presence, which happens in Christ’s return and our resurrection.

The Necessity of Baptism

This raises a number of important questions; questions that Moses doesn’t downplay, with quotes such as, “Paul’s entire argument depends on believers’ actual participation in Christ’s trajectory in baptism. Or to put it more bluntly, Paul’s argument demands that something concrete happen to the believer in baptism” (p62), otherwise “believers remain under the power of Sin” (p63).

This is both the most important and most controversial point Moses wants to make. If baptism is spiritual warfare, altering one’s relationship to Sin and Death, then baptism does something, something that one has not experienced if they are not baptized. But does this mean that we can have unbaptized, born-again, Spirit-filled Christians still completely under Sin’s reign? And their lack of baptism is the cause? I have some thoughts, but will save them for another post. Until then, I’d love to read your comments!

Many thanks to Fortress Press for kindly providing a review copy. Their generosity has not affected my opinions.

Are We United with Christ by Baptism?