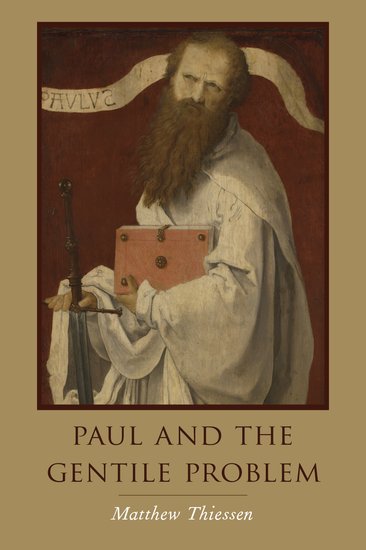 Paul and the Gentile Problem: Evaluation

I must hastily admit that I have barely done justice to the creativity and nuance of Thiessen’s arguments. His is a consistent and compelling account of Paul’s theology. Much rang true to me as a more historically sensitive reading. Though some of the re-readings are less convincing, or simply difficult to follow, others are very compelling. In a number of areas, this book significantly challenged my thinking and has provoked me to re-think much of what I believed exegetically and theologically regarding Messianic Jewish identity. This book appears to be the first important step in a fruitful study journey for me.

Two areas were particularly fruitful to my own thinking. First is the recognition that Paul did not criticize Judaism, must less cancel the Law; he simply does not believe Law-observance was for Gentile believers. Such an idea resolves the tension I have long felt between Moses’ view of the Law and Paul’s! Many want to resolve this tension by re-reading Moses’ positive representation of the Law (even with some saying the Law was “not gracious”!), dismiss the OT in light of the NT, or that obedience to the Law is inherently sinful now that Christ has come. Thiessen’s ideas here, if correct, relieve this tension. It appears to better harmonize the Law-supporting Paul in Acts with Paul’s own letters, but what of the “disputed” letters of Paul? Second, Thiessen’s presentation of the Gospel in part two is thoroughly convincing and illuminating. David Burnett already introduced me to the qualitative reading of the “star” promise, but Thiessen helps connect some more dots. Recovering this idea is huge in several ways, and raises many questions for further study (such as resurrection in the OT, divine messianism, and theosis/deification). While many will debate part one, part two is significant.

What hinders me from embracing his interpretations of Romans 2 and Galatians 4 are some verses left unaddressed; verses that  appear to undermine his view. For a view to convince, it must be comprehensive and explain not just some of the data but all of it (there will always be some that prove difficult to “fit”). For example, Rom 2:14-16 is unaddressed and I could find no explanation of Gal 4:25’s reference to “present Jerusalem”. Given that Thiessen doesn’t believe Paul is critiquing Judaism, I’m not sure what to do with this line.

Thiessen’s insistence that Paul considered circumcision as improperly administered unless on the eighth day is certainly intriguing. However, he relies on it heavily to explain certain verses (Rom 2:25; Gal 5:3). Yet the evidence was scant, and Thiessen even recognized some Jewish texts that allowed postponing circumcision for various reasons (a tradition which continues today). This argument, therefore has much weight placed on thin support.

That said, at times I think Thiessen caricatures the Old and New Perspectives, or at very least, oversimplifies them. This is somewhat unavoidable in a polemic work, but I often did not see myself in his critiques. In fact, his “re”-readings of certain passages were quite orthodox beneath the surface. That is to say, Thiessen is less radical than perhaps he thinks.

Less important, but extremely frustrating, were the choice for endnotes rather than footnotes. I do not criticize Thiessen, as this may not have been his decision. However, it resulted in a frustrating read, since the footnotes were so fruitful and should not be avoided.

This was a fascinating read. Paul and the Gentile Problem is a testament to how much can be achieved in a small book. As I am a voracious reader, I find myself consistently frustrated reading books containing hundreds of pages arguing for a tiny nuance, a nuance that more deserves a footnote than a book! This, by contrast, is 169 pages before endnotes, and yet each page felt like ten in terms of content and the thought required to press on. Its size explains and justifies some of the avoided issues. However, in these areas Thiessen leaves himself open to critique, as he has provided a possible and at times highly compelling rebuilding of the Pauline castle. A reading with a tower here and moat there, but with the back door unlocked. As to the book, this is a weakness. As to his argument, these are simply waiting to be addressed elsewhere. The upcoming book by Fortress will hopefully settle these questions.

I would call Paul and the Gentile Problem revolutionary with an asterisk. Personally speaking, some points can be completely adopted, and these points are very welcome. Other points are pending, waiting for more evidence, or understanding of how they can be harmonized. Thiessen has certainly provided a fresh and compelling perspective. When it comes to Abraham, his story, his promise, and how central it all was to Paul, I think Thiessen nailed it.

Buy Paul and the Gentile Problem