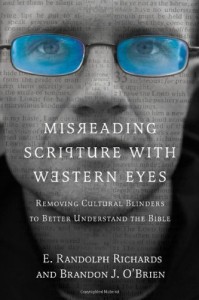 This is a guest review by Randy McCracken. Randy is a fellow teacher at Calvary Chapel Bible College York, author of Family Portraits and blogs at Bible Study With Randy. I highly recommend you check out his blog!

As an American, I thought I knew England. After all, I had visited the UK on three occasions. However, when my wife and I moved to England a little over ten years ago, we realized that we had settled into a very different culture. Many have had the experience of being offended or bewildered by the words or actions of a person from a different culture. This is not because that person intentionally sought to offend or bewilder us, but because two people with different culturally conditioned mindsets viewed the same words or actions differently. Our experience with Scripture can be similar. Richards and O’Brien, the authors of, Misreading Scripture With Western Eyes, state, “We can easily forget that Scripture is a foreign land and that reading the Bible is a crosscultural experience” (p. 11). One of their stated goals is “to remind (or convince!), [us] of the cross-cultural nature of biblical interpretation” (p. 12). The authors note that we all carry cultural assumptions which we may not even be aware of––in their words things that “go without being said.” The result can be, “When we miss what went without being said for them [i.e., the biblical authors] and substitute what goes without being said for us, we are at risk of misreading Scripture” (authors’ emphasis, p. 13).

Using the illustration of an iceberg, Richards and O’Brien break their book down into three parts as they explore nine differences between Western and non-Western cultures (3 differences in each section). Part One, the tip of the iceberg represents the cultural differences that are most obvious. Part Two involves cultural assumptions which are just below the surface––they “are visible once you know to look for them” (p. 16). Part Three examines the bottom of the iceberg. These are “cultural issues that are not obvious to all” (p. 16). Readers of New Testament Background material will be familiar with some of these topics such as Individualism and Collectivism (chap. 4), or Honor and Shame (chap. 5). Having previously read Bruce Malina’s The New Testament World: Insights from Cultural Anthropology, and David deSilva’s Honor, Patronage, Kinship, & Purity: Unlocking New Testament Culture, I wondered if I was simply going to go over familiar territory on these topics, but Richards’ and O’Brien’s approach is fresh and insightful, frequently suggesting a new route for understanding and applying a difficult verse or passage.

The authors frequently bring their own cross-cultural knowledge to bear. Richards was a missionary to Indonesia and shares some of his experiences there, demonstrating how an eastern culture often has a different perspective on an action or a biblical verse. O’Brien’s wife grew up in southeast Asia and he confesses to drawing on her understandings as a “third-culture kid” (his expression, p. 219), as well as the understandings of friends from other cultures. He also brings his knowledge of Church history to the topic. O’Brien does not mention any experience living in an eastern cultural setting however, and even with Richards’ experience in Indonesia, one can question if everything in Indonesian culture transfers directly to biblical culture.

Many chapters do offer valuable insights and interesting anecdotes. One example of this is chapter 6 entitled, “Sand Through the Hourglass.” This chapter looks at the different perspective on time between eastern and western cultures. Although people may be aware that different cultures view time differently, it may never have occurred to the average Bible reader just how their concept of time affects their interpretation of what they read. The authors point out that our concept of time affects everything from our understanding of the use of wisdom and the interpretation of proverbs, to our understanding of how biblical books were composed. For example, the western reader usually comes with the supposition that a narrative will follow chronological order. It is often confusing when we find things in Scripture that do not follow our preconceived ideas of time. The authors note that eastern cultures do not have the same preoccupation with chronology that westerners do. Richards point out “that telling stories for Indonesians is often more like making a soup: some ingredients had a specific timing, but the other elements just needed to be added in sometime” (pp. 147-148). This different understanding of time also attaches itself to the meaning of the word “soon.” When a man told friends he was having a banquet “soon,” it carried a different meaning for someone in antiquity, than it does for a modern westerner.  This made me think of Jesus’ statement, “Surely I am coming quickly” (Rev. 22:20), and how we as westerners can attach a different meaning to the idea of “quickly.”

There are, however, a few things to quibble with in this book. One example is the author’s discussion of honor and shame in chapter 5. There is no doubt that honor and shame is a major cultural difference between western culture and the cultures reflected in Scripture. Understanding this dynamic has opened my eyes to many things recorded in Scripture. However, the authors maintain that in an honor and shame culture all actions are predicated on what is acceptable or not acceptable to that culture. Guilt plays no part; it is all about losing or saving face (p. 118). Their interpretation of the David and Bathsheba story, which they give as an illustration, raises certain questions which the authors do not satisfactorily address. According to their understanding, once Uriah was killed and David took Bathsheba as his wife, he would have considered the matter resolved and “it is likely that David never gave it another thought” (p. 125). My question is, “Isn’t the king supposed to know God’s law? (Deut. 17:18-20). Wouldn’t David be familiar with commandments like, “You shall not murder; You shall not commit adultery?” (Exod. 20:13-14). In other words, does it really take a prophet (Nathan) to come and tell David these things are shameful when God has already spelled out that certain actions are displeasing to Him? Similarly, how does Nathan come to this conclusion if society is saying it’s alright for kings to act this way, as the authors maintain? The Bible clearly demonstrates that God’s law informs what is honorable and what is shameful in Israelite society. All one has to do is read any of the prophets to see that they constantly take their society to task for violations of God’s law. If the group was the measure of honor and shame, this wouldn’t be the case. Richards and O’Brien have made a serious error by ignoring this aspect of Scripture.

For readers unfamiliar with the cultural values of the ancient Mediterranean world, it might be helpful to read some introductory material such as that provided by David A. deSilva in his An Introduction to the New Testament (pp. 111-144), but Richards’ and O’Brien’s book is imminently readable, and therefore suitable for the beginning student of a New Testament Backgrounds course, or a course on Hermeneutics. As noted above, this book is not perfect, but it certainly provides food for thought. Pastors and teachers of the Bible would do well to familiarize themselves with the material in Misreading Scripture with Western Eyes, as we have all too frequently made some of the mistakes recorded in this book. Ultimately, the authors’ purpose is more laudable than simply saying, “look at the way you’ve misrepresented Scripture,” their desire is to make us aware of the presuppositions that we approach Scripture with. Particularly those presuppositions which are culturally conditioned and, therefore, easily overlooked. As the authors state, “We are not implying that all our Western reading habits are wrong….We want to unsettle you just enough that you remember biblical interpretation is a cross-cultural experience and to help you become aware of what you take for granted when you read” (pp. 21-22). No matter where you may have travelled, the authors of Misreading Scripture with Western Eyes will take you on a journey that’s worth the trip.

IVP provided a copy of this book in exchange for an unbiased review. Be sure to check out Randy McCracken’s blog: Bible Study With Randy.