“Who is the Messiah ben Joseph?” An Interview with David Mitchell

David Mitchell is a unique fellow. He is a Biblical scholar, expert in the Psalms, and an archaeo-musicologist. His important work on the Psalms, The Message of the Psalter, gave a fascinating defense of an eschatological focus to the Psalms, and is referenced in virtually every major work on the Psalter. Mitchell also recently released a stimulating work devoted to the Songs of Ascent (my review). His newest work is sure to be just as fascinating, as it is devoted to a little-known topic: the Messiah ben Joseph.

I sent over some questions about this new book to Mitchell (in bold), and here are his answers.

Please briefly explain the thesis of your book. Who is the ‘Messiah ben Joseph’?

Messiah ben Joseph is the dying Galilean messiah of rabbinic Judaism. He is mentioned in the Targums and the Talmud and in many other places in rabbinic literature. The big question is: When did this figure originate? If, as many maintain, he originated during the Christian period, then we face the unlikely scenario that the rabbis, having rejected one slain Galilean messiah, then created another in his image. But there is great opposition to the idea that he originated in pre-Christian times, for obvious reasons. My position is that he did indeed originate in pre-Christian times, that he originates, in fact, in Genesis 49.24 and Deuteronomy 33.17, and can be traced through the prophets, the Psalms, and numerous intertestamental texts.

How did you first run across this topic and what drove you to 25 years of study?

Your site boasts this as the “first full-length monograph” on the Messiah ben Joseph. I expect I’m not alone when I say that I had not even heard of it before. Why do you think it has not received proper attention in academic and popular circles? 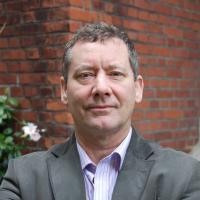 As you will see from the book, Messiah ben Joseph has always been a controversial subject. The rabbis always preferred to keep the subject on a strictly need-to-know basis. This was not only to keep it out of the hands of Christian apologists, but because the issue of the figure’s origins (as noted above) was deeply problematical.

I hope it will help Jews see the biblical roots of Christian messianism. I also hope it will help Christians see that there is no radical break between ancient Israelite messianic expectation and the dying son of God in the New Testament. I think it should be read by every Christian and every Jew who wishes to understand better our great mutual hope in the coming of the Messiah.

What projects are you working on next?

Can’t say for sure. Right now I’m writing an article on Messiah for the Society of Old Testament Studies Wiki. I am planning a 20th anniversary update of my Message of the Psalter. But now I’m wondering if I should write something else in between. Also, having published two large books in two years, I’m wanting to catch my breath.

Be sure to check out Mitchell’s book. Visit David Mitchell’s website for more information on his books, links to academic articles, and music.