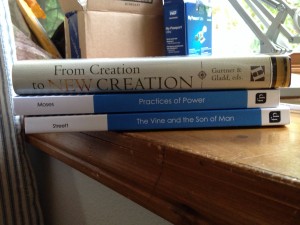 With CCBCY semester finished, Tasha, Isa and I are all in visiting our family in Washington. A trip to the USA always includes new books, and here are the first fruits that were waiting for me when we arrived. Thanks to Alban, Fortress Press, and Hendrickson for providing review copies of the below books.

I’ve not worked with these three publishers before, so I’m particularly excited. Apostle of the Last Days is not pictured because it arrived in the UK the day before we left but I am eager to dig into it when we return.

Below are the publisher’s book blurbs:

Paul’s life, letters, and theology are unified by the theme of the overlapping of two ages—this age and the age to come. With the life, death, and resurrection of Jesus Christ, the age to come (i e , kingdom of God) broke into this present age but didn’t end it. Where other important doctrines such as justification by faith, reconciliation, and the cross of Christ were key players in Paul’s theology, Marvin Pate compellingly demonstrates that the overarching theme driving the Pauline corpus was indeed Paul’s inaugurated eschatology. In fact, Paul’s apocalyptic framework was only one of a number of other rival eschatologically focused religious perspectives of the day, such as the Imperial Cult, Hellenistic/syncretistic religion, and the merkabah Judaizers. Paul’s vigorous debates with the churches he served centered on the exclusivity of the gospel of Christ that he preached: the nonnegotiable apocalypse of Jesus the Messiah.

Apostle of the Last Days will be welcomed in the classroom as a one-volume treatment of Paul’s life and letters as well as his theology.

The Vine and the Son of Man (Andrew Streett)

Since the discovery of the Dead Sea Scrolls, scholars have traced out the rich and complex traditions of biblical interpretation in Second Temple Judaism. Little attention has been given to Psalm 80, however. Andrew Streett demonstrates that this psalm, which combines the story of Israel as a vine ravaged by others with hope for a “son” of God who will restore the people’s fortunes, became a rich trove for eschatological hope.

This study traces interpretations of Psalm 80 through many texts and argues that the psalm was an important biblical text through which early Christians understood the Christ event.

The conception of “powers” and “principalities” in Paul’s thought has been amply explored—but how did the powers “work” in the Pauline community? Robert Ewusie Moses argues that Paul’s conception of the powers is best understood through examining the practices he advocates for the early believers. In this detailed study, Moses shows that Paul believed certain practices guarded believers from the dominion of the powers while others exposed humans to the work of powers of darkness. Moses traces the distinct function of “power-practices” in each of Paul’s letters and draws illuminating comparisons with traditional African religious practices.

In this unique text, sixteen well-known evangelical scholars celebrate the work of G. K. Beale, whose study and understanding of the Scriptures has garnered immense appreciation among scholars and exegetes of all kinds.

Beale is renowned for his studies that explore how the writers of the New Testament used the Old Testament Scriptures in their letters, Gospels, narrative, and apocalypse. His work has greatly contributed to Evangelical biblical scholarship as we know it today.

While this commemorative work celebrates one man’s contribution to Evangelical biblical scholarship, it is also a technical text that students and professors of advanced NT studies will value in the classroom.