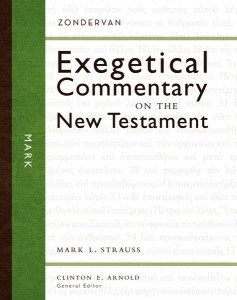 Mark Strauss is the author of the acclaimed Gospels introduction Four Portraits, One Jesus and has provided the edition for Mark in the Zondervan Exegetical Commentary on the New Testament (ZECNT).

For Strauss, Mark emphasizes Jesus as Messiah (Mark 1:1-8:30) and Suffering Servant (Mark 8:31-16:8), with a strong focus on discipleship. In his introduction, Strauss follows fairly traditional conclusions with regards to authorship (Mark with Peter’s direction), Date (late 60s). Strauss also holds to Markan Priority (i.e. the first Gospel). Rather than following a geographical outline of Mark like Lane, France, and others, Strauss follows a theological outline framed around the two themes above. In the end, the outline is fairly similar to alternatives in its verse divisions. Strauss tentatively holds that Mark is intended to end at Mk 16:8, and that Mk 16:9-20 are a later scribal addition. Though not considered original with Mark, Strauss comments briefly on these latter verses.

Following the ZECNT format, the commentary for each section of text contains the following sub-units:

The explanation of the text is clear, concise, and competent. I found his treatment of the miracles and his comments on Greco-Roman culture particularly useful. At times, Strauss also handles some of the differences in the Gospel accounts and summarizes the issues well. However, space prevents from much detail and creativity so the commentary series shines more in its unique features, such as the Graphical Layout and Theology in Application sections.

Unfortunately, I am not convinced Strauss utilized the Graphical Layout to the best of its potential. Given this section beginning each section of text, I was expecting more focus on the literary features of Mark. To me, this was underutilized by Strauss, and resulted in me bypassing his graphical layouts before long since they were largely irrelevant to his explanation of the text. Of course space is a restraint in this series, but perhaps Strauss could have used the space he devoted to addressing Gospel harmonization or historical Jesus matters as these were not developed in much detail. I think greater focus would have given the commentary a more consistent and unique role for the interpreter.

That said, the other unique feature of this commentary series, the Theology in Application, was used to great effect. I found most of these to be pastoral in tone, applicable and naturally connected to the meaning of the passage in question. This will be very useful to the pastor or teacher who wants to ensure they grounding their exhortations in the text.

Though not necessarily offering anything new, Strauss’ Mark commentary is a solid contribution to the ZECNT series and certainly recommended for pastors and teachers for its accessibility, clarity of prose and particularly the content in the Theology in Application sections.Some knowledge of Greek is beneficial, but not necessary. Given its format, Mark would serve well giving an introduction a passage, with other commentaries filling in the detail and meeting other needs.

Psalm 80: the Most Neglected Messianic Psalm?

Giveaway: The Flow of the Psalms by O. Palmer Robertson!