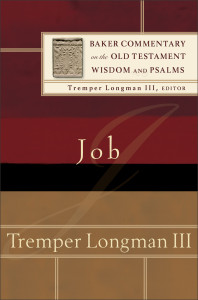 Job is a perplexing book. Ask someone the story of Job and the chances are they’ll have the basic structure down, but having 42 chapters seems a little unnecessary, right? And aren’t there dinosaurs in there? And isn’t it weird that God allows Satan to do whatever he wants to Job? Isn’t that unfair? And why is it so long? I’m often drawn to study the more mysterious biblical books, probably because those are ones that I need the most help making sense of! It’s for this reason that I was delighted to read Tremper Longman III’s Job commentary in the Baker Commentary on the Old Testament Wisdom and Psalms series.

I very much enjoyed this commentary, though I will offer a few criticisms below. In regard to the positives, I will simply list the aspects I appreciated since they are diverse.

Now for my few criticisms. At the beginning of each section Longman provides his own translation of the text. Considering that Job is such a long book, these translations can take up a few pages. As a random example the translation of Job 6:1-7:21 takes up 4.5 pages. This is understandable, but what I found tedious was that each smaller chunk of interpretation begins with a repetition of the translation for that section. So while we have the translation of 6:1-7:21 at the beginning, we also have each bit repeated at Job 6:1-4, 8-10, 11-13, 14-23, 24-30, 7:1-10, 11-16, and 17-21. I need not explain how repetitive this gets in the later sections like Elihu and Yahweh’s speeches. This isn’t annoying so much as it feels like a waste of space; I can’t help but wonder how much smaller this commentary would be if all the translation was taken out!

On a more important matter, I found Longman a little dismissive of more traditional interpretations at times. I’ll give the three examples I have in mind.

Getting back on track, I greatly enjoyed Longman’s commentary. Job filled a niche role in my Job studies as it was both devotional and academic, pastoral and exegetical. I had not yet read a commentary on Job that stands so naturally in the middle between two extremes. Believe it or not, I actually read Job in my morning Bible reading over a period of a few months and read Longman’s Job commentary alongside it. This was a very helpful and devotional experience for me and would highly recommend others doing so!

I would certainly recommend Job to pastors, teachers and students for better understanding Job, for devotional purposes, and for teaching.

Many thanks to Baker Academic for providing a copy of this book in return for an unbiased review.

Another Take on Ehrman’s “Divine Humans” by Michael Heiser