Review: Introduction to the Psalms: A Song from Ancient Israel by Nancy deClaissé-Walford 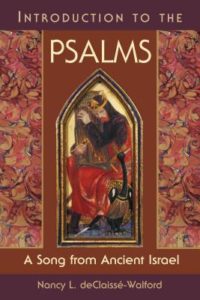 The Psalms are rightfully beloved, but many are unaware of its clear and intentional structure. Or if they are, they have not considered the purpose for its structure. Nancy L. deClaissé-Walford’s Introduction to the Psalms: A Song from Ancient Israel, “seeks to provide the reader with a solid introduction to the Hebrew Psalter, one that is informed by an interest in its shape and shaping” (vii). There are many introductions to the Psalms, but a unique feature to this is that it reads the Psalter as a unified, interconnected work.

Introduction to the Psalms

First, deClaisse-Walford introduces the Psalms, with a discussion of their impact and attempting to date the completed Psalter as we have it today. Chapter one exposes the reader to the features Hebrew poetry, such as parallelism, word pairs, chiasmus, inclusio, and acrostic. Chapter two introduces form criticism, that is, the classification of Psalms types or genres such as hymns, laments, royal, creation, wisdom and enthronement psalms. But the Psalter is not arranged by type, so Chapter three turns to examine the actual shape of the Psalter. Individual Psalms make up larger collections, such as the Davidic (Ps 3-41; 51-72; 138-145), the Asaphite (Ps 73-83) and the Songs of Ascents (120-134). The Psalter consists of five Books compiled over time. Chapter four details the history behind the Psalter’s shaping. deClaissé-Walford’s argues that the Psalter as we have it was completed “late in the postexilic period, perhaps as late the first century of the common era” (p47), and was “shaped into five books which narrate a history of ancient Israel” (p56) that reflects the theological worldview of its editors. Chapters five through nine trace deClaissé-Walford’s understanding of the storyline of the Psalter book by book. Book One depicts “the ‘golden age’ of ancient Israel, when a king of God’s choosing reigned in Jerusalem” (p59). Book Two “continues the story of the reign of King David” (p73), but with other characters such as Asaph, the Korahites and Solomon, and concludes as “Solomon ascends the throne of the nation of Israel” (p83). Book Three “reflects events that took place during the period of the divided kingdoms of ancient Israel” (p85). Book Four describes Israel’s time in exile, where they recognized “the ‘grand experiment’ of kingship in Israel has failed” (p101); they need to look not to a future king, but to Yhwh as king. Finally, Book Five “leads the reader/hearer from the despair of exile in Babylon to the celebration of a new life in the land of Israel with God as king and the Torah as the guide for life” (p128). Chapter ten, the final chapter, retraces the five Books asking the question “how did the post exilic community perceive and use the book of Psalms”? (p129). deClaisse-Walford concludes that a major theme is that Yhwh is king.

There are several clear strengths to this work. First, it is clear and concise; essential for introductions. Second, deClaisse-Walford clearly knows her material, drawing from relevant ANE texts and rabbinic material for supporting illustrations. Third, it is relatively unique through being an introduction to reading the Psalter in light of its shaping. Fourth, several side-bars explain a word or concept in fuller detail. These are helpful, though I think they could have been formatted better to aid clarity in reading, as they share the same font as the text body.

There are a few more quibbles. That the Psalms uniquely capture “for the most part, not the words of God to humanity, but the words of humanity to God” (p3) is true in what it affirms but not what it denies. For the Christian, the Psalter is just as God-breathed as any other Biblical book.

More problematic, however is that deClaissé-Walford’s theology of each Book reveals that subjectivity is a real danger in the canonical approach. While some big-picture elements (Book 3/Ps 89 climaxing in exile) ring true, others seem highly speculative. First, it is not at all clear to me that Book One “tell[s] the story of the life of King David” (p72, emphasis mine), nor that it depicts the “golden age” of Israel (p59). Sure, all Psalms in Book One are Davidic, but no clear story is perceived, and the dominance of laments is at odds with it recording a supposed “golden age”. Second, deClaissé-Walford follows Gerald Wilson in denying that Books Four-Five hold a hope for a future Israelite king. This is seen in her downplaying of David in these Books, going so far as to state that he is “absent in Books Three and Four” (p113), despite Ps 86, 101, and 103 all bearing his name. Ps 89 is apparently about “Israel’s broken covenant with David” (p98), when the covenant was clearly between Yhwh and David, and even Ps 89 itself holds forth a hope in Yhwh’s faithfulness despite human disobedience. Besides these points, the presence of Psalm 110 in Book Five should be enough to challenge her thesis. Third, for deClaissé-Walford, the Psalter tells a finished story; that is, Book Five ends with an encouragement to Israel in her postexilic state as “an identifiable entity within the vast Persian empire” (p128), but with no anticipation of the future. This does not fit the content of Book Five, which, assuming the canonical reading, has all twelve tribes in the land (Ps 120-135) ruled by a priest-king (Ps 110). These remain unfulfilled.

As she set out to accomplish, Nancy L. deClaissé-Walford’s Introduction to the Psalms: A Song from Ancient Israel is a solid introduction to the Psalms from a perspective that takes its shaping seriously. It is recommended particularly for those interested in such an approach, as long as one recognizes that other conclusions have been reached by using the same approach.

Many thanks to Chalice Press for providing a copy in exchange for an honest review.

Buy Introduction to the Psalms from Amazon

Review: A Biblical-Theological Introduction to the New Testament