Review: The Hermeneutics of the Apostolic Proclamation by Matthew Bates 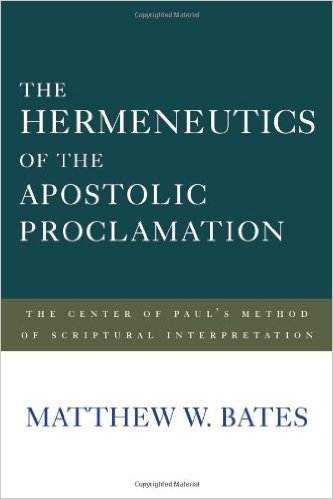 The heart of the Christian faith is not ideas, truisms, or proverbs, but rather, an event. In particular, a series of events constituting one meta-event concerning the person of Christ: the incarnation, life, death, burial, descent to Hades, resurrection, appearances to others, ascension, and session at God’s right hand. This “Christ-event” has always been central to the faith, and in The Hermeneutics of the Apostolic Proclamation, Matthew Bates applies this paradigm to Paul’s own reading of the Hebrew Scriptures (the OT). For Bates, “Paul received, utilized, and extended an apostolic, kerygmatic narrative tradition centered on key events in the Christ story as his primary interpretative lens” (p2). In other words, Paul’s own interpretive center is the story of Christ.

The Hermeneutics of the Apostolic Proclamation

This reassessment of Paul’s own hermeneutic is unfolded over six chapters. Chapter 1 reviews scholarship’s attempts to discern Paul’s hermeneutical convictions. This comprehensive tracing of scholarly opinion is fascinating in its own right. In Bates’ own view, the recent scholarly emphasis that Paul was a Jewish interpreter is obviously correct and must be reclaimed, but not without qualification. Alongside this point, Bates holds that intertextuality has been incorrectly applied to biblical studies when it only looks backwards, and not also forwards. That is, Paul must not be compared only with those preceding him, but also those who follow. This pushes back against the popularity of reading Paul only in light of Second Temple Judaism, and with no consideration of the Christian Fathers. Since “Paul is above all a Jew committed to Jesus Christ as his Lord, and therefore these comparisons between Paul and early non-Christian Judaism cannot capture the central features of his hermeneutic” (p47). That is, Paul’s own convictions are closer to Justin Martyr, Tertullian and Irenaeus.

Chapter 2 examines two passages where Paul lays his hermeneutical cards on the table: 1 Corinthians 15:3-11 and Romans 1:1-6. Despite these texts’ clear implications for Paul’s own interpretative convictions, they have been overlooked in scholarship. Both texts place the narrative of Christ (Christ-event) in center stage for Paul’s own reading of Scripture. 1 Corinthians 15:3-5 is found to be parallel to Luke 24:13-49, which reveals that “according to the scriptures” is likely a “christocentric interpretation” (p79) of the OT that required a post-Easter key to unlock. Both texts reveal that the events of Christ are central to Paul’s own reading of the OT.

Chapter 3 continues tracing Paul’s own hermeneutical statements. First, the role that quotation played in the composition of writings in antiquity is considered. This extended treatment of ancient writing practice indicates that typology and allegory were not primary to Paul’s own hermeneutics, but used to exhibit the “virtues of good style” (p117). This responds to the widespread use of typology to explain Paul’s interpretation. Second, classic hermeneutical texts are considered: 1 Corinthians 10:1-11 (types), Galatians 4:21-31 (allegory), and 2 Corinthians 3:7-18 (Moses and the veil).

Turning from interpretive presuppositions to actual technique, chapter 4 introduces prosopological exegesis, while chapter 5 applies it to several Pauline texts. Prosopological exegesis “explains a text by suggesting that the author of the text identified various persons or characters (prosopa) as speakers or addressees” (p183). In practice, this means Paul identified persons or voices in the OT text and this aided him in his interpretation. Such a method is not original to Bates, but is instead a popular method in the ancient Greco-Roman world, and exhibited in early Christian writings. This method is applied to Romans 10:6-8; 15:3; 10:16; 10:19-21; 11:9-10, 14:11, 15:9 and 2 Corinthians 4:13 to fruitful effect. In these texts, Paul finds characters, often Christ or the Father, as speaking and interacting with one another.

Chapter 6 concludes the book by summarizing the previous chapters and revealing how Bates’ conclusions affect the scholarship surveyed in chapter 1.

For me, The Hermeneutics of the Apostolic Proclamation is a game-changer in two areas. First, in the explanatory power of prosopological exegesis. Second, by not only reading those who came before Paul but allowing early Christians to influence my interpretation. To dismiss the early church assumes that Paul has more in common with his unbelieving Jewish predecessors. But how could early Christians’ interpretations be so far off base so soon after the NT writings? As I understand him, Bates is not arguing for an over-reactive shift away from any use of Jewish sources to an exclusive use of later Christian interpreters. Rather, he is arguing that both must be considered by the interpreter while recognizing that Paul surely had more in common hermeneutically with his fellow Christ-followers. To see these two interpretive elements in action on the entire NT, see Bates’ excellent The Birth of the Trinity (review). That work is built upon this one’s foundations.

Placing the Christ-event at the center makes good sense. For Paul, this event brought all else into alignment. What’s more, recognizing this fact is natural for the Christian interpreter. The believer is encouraged to read Scripture like Paul, the way that seems most natural: in light of Christ.

The Hermeneutics of the Apostolic Proclamation is highly recommended for those interested in Pauline studies, the NT use of the OT, and the role of early Christians for interpretation. Bates has produced a thorough and compelling account of Paul’s hermeneutics that should be read widely.

Many thanks to Baylor University Press for providing a review copy. I was not required to provide a positive review.

Buy The Hermeneutics of the Apostolic Proclamation on Amazon