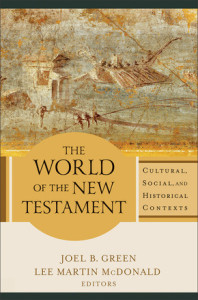 This is a guest review by Randy McCracken. Randy is a fellow teacher at Calvary Chapel Bible College York, author of Family Portraits and blogs at Bible Study With Randy. I highly recommend you check out his blog!

The World of the New Testament is a mini dictionary of New Testament background topics. It is edited by Joel B. Green and Lee Martin McDonald and consists of articles by scholars (seasoned veterans and new up and coming ones) who specialize in studies of the field known as Second Temple Judaism (meaning the period following the exile until the destruction of the Temple in 70 AD). Studies of this period have opened up a new window on understanding the New Testament. This book is an effort to treat many of the important topics related to a better understanding of the New Testament and the Roman World in which it was conceived.

The Contents of “The World of the New Testament”

The World of the New Testament is broken into 5 sections: 1) Setting the Context: Exile and the Jewish Heritage which includes such topics as the Exile, the Hasmonean Era (including the Maccabean Revolt), the Herodian dynasty, as well as others; 2) Setting the Context: Roman Hellenism which looks at such topics as Greek religion, the Imperial cult, slavery, family life and education in the Greco-Roman world, etc.; 3) The Jewish People in the Context of Roman Hellenism includes topics on the Temple and priesthood, Jewish sects (Pharisees, Sadducees, etc.), the Dead Sea Scrolls, and other matters pertaining to Judaism and Jewish life; 4) The Literary Context of Early Christianity focuses on the reading and writing of manuscripts, and what can be learned from sources as divergent as Homer and Josephus as regards the New Testament; and 5) The Geographical Context of the New Testament is the final section which includes articles about Jesus research and archaeology, and places such as Egypt, the province and cities of Asia, Macedonia, and of course, Rome. As indicated, this is not a complete listing of topics under the various sections, but a sampling so that the reader might have an idea of the subject matter.

Most of the articles in this volume are designed to present an overview of the various subjects that concern New Testament backgrounds study. One who is acquainted with this field may not find much that is new, but the student or curious person seeking an introduction to this area of study will discover a wealth of information at their fingertips. One significant area that was overlooked, however, concerns first century social values and institutions such as those addressed in David A. DeSilva’s Honor, Patronage, Kinship & Purity (although family life is addressed in chapter 14 and there is a short section on purity in chapter 25). Perhaps the editors thought this would make a long volume even longer, or that this information could be gleaned from other resources such as DeSilva’s book. Nonetheless, it is an important shortcoming in this volume and there is no explanation offered as to why as significant a subject as honor and shame is overlooked.

Critiquing “The World of the New Testament”

On a more positive note, I greatly enjoyed E. Randolph Richards article entitled, “Reading, Writing, and Manuscripts.” Richards discusses literacy in the first century world, as well as the writing methods employed in producing manuscripts. One point I found particularly fascinating was the expense involved in producing a large manuscript. Richards constructs a chart of some of Paul’s letters and, based on the number of lines and the cost for materials and labor, projects what it would cost in the modern world to produce them. Richard’s estimates that Romans, Paul’s longest letter, would cost $2,275.00, while Philemon, Paul shortest letter (and closer to the usual size of an ancient letter), would cost $101.00. Even if Richard’s figures aren’t totally accurate, this certainly provides a perspective on the value and cost involved in producing the New Testament documents! Other chapters I found particularly helpful include, “Greek Religion” (Chap. 8), “The Imperial Cult” (Chap. 9), “Jews in the Diaspora” (Chap. 23), “Literary Forms in the New Testament” (Chap. 30), and “Jesus Research and Archaeology” (Chap. 36) by the renowned scholar James H. Charlesworth. This is not to say that I didn’t find many other helpful and interesting articles in The World of the New Testament, but these chapters stood out to me. Of course, knowledge and interest often dictate what one finds appealing and another reviewer might chose a different selection of chapters.

Another criticism I have of The World of the New Testament, is the quality of photos included in this volume. Photos are certainly a good idea for a work of this kind, but the black and white photos included are not helpful and in my opinion they mar the overall appearance and quality of the book. The photos are usually very indistinct. Shadows frequently obscure details and frustrate rather than illuminate. The book also includes many maps and charts. Again, this is a helpful feature for a book of this nature. Some charts and maps are very helpful, others less so. For example, in section 5 which looks at the geography of the New Testament world, some of the maps don’t list the cities that are being written about, or, in other cases, you only find a particular city on a map a few pages later and so you have to flip back and forth.

In spite of its shortcomings, there is still a lot of good material in The World of the New Testament, and thus I would recommend it to those who are interested in this field of study. This is a book for the beginning or intermediate student, or interested layperson. However, the language is often technical when simpler expressions could have been substituted or better explained. The terminology and subject matter does not make for casual reading, but for one seeking a deeper knowledge of the New Testament world this book will provide ample information.

Thanks to Baker Academic for providing this copy in exchange for a fair and unbiased review. Be sure to check out Randy McCracken’s blog: Bible Study With Randy.

A Story of Grace by Phil Metzger