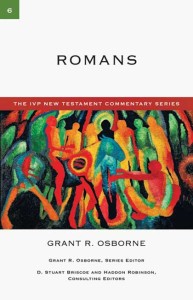 Grant Osborne is professor of New Testament at TEDS and a prolific commentator, offering well-received work on Revelation and Matthew, with Mark coming this year in the new Teach the Text series. His commentary for Romans in the IVP New Testament Commentary series (IVPNTC) is also very popular. Having just taught through Romans and worked through Osborne’s commentary, I can see why.

The IVPNTC series is designed to move naturally from solid exposition of the biblical the text to its application today and in that sense it is like a bridge between scholarship and the lay person. Alongside Osborne’s Romans, I have only read portions of Beale’s 1&2 Thessalonians, and what is common to both is a very organic link between scholarly concerns and contemporary relevance. At times we are knee deep in exegesis and it feels more like a Pillar or BECNT commentary, and other times we are in a sermon-like illustration or applicational section more in common with a Preaching the Word commentary. I will comment in more depth below on how Osborne manages both.

As to specific views and conclusions, here are some choice quotes and summaries on sections throughout Romans:

As seen from the above quotes, Osborne tends towards common Arminian conclusions, but these are not just presuppositions but well-argued from the text itself. Osborne has a very careful and subtle exegesis; he is not afraid to let the text take him to a different conclusion than is comfortable. Despite quite Arminian leanings, Osborne at times sounds very similar to Schreiner. In fact, I requested this commentary as it is a well-respected commentary representing the Arminian position, but was surprised that he sometimes sounds very Calvinistic! Back to Schreiner; at times Osborne seemed a little too close to him for me. I was using both in weekly preparation and was surprised at how similar even Osborne’s wording was to Schreiner’s on a given passage. It appears that he leaned quite heavily on Schreiner’s work in his exegesis, even if he differed with his conclusions (Rom 7, 8, and 9 in particular).

A problem lies in the format and audience of the IVPNTC series itself. The attempt to wed thorough exegesis with contemporary application at times results in the commentary doing neither overly well. If one is after exegesis, the application will likely get in the way and the binding of the book is not practical for using as a reference. If one is after an applicational commentary, the exegesis will likely be too much and including the footnotes in the text does not “read” well. This raises the question of the intended audience and whether one should choose this commentary over two commentaries aimed to fill the two different needs, and better equipped to do so.

If one has Schreiner or Moo, I doubt there will be much “new” here, except for where he differs on broader Arminian concerns. If one is after an Arminian alternative on Romans or to read alongside and serve as a “foil” for, then this is certainly recommended. Osborne presents a very nuanced and balanced argumentation for his conclusions, which all deserve to be heard. This would serve nicely as a slightly less-academic, more devotional, and Arminian alternative to Schreiner or Moo; however, the very little difference in terms of actual exegesis and the format of the series itself lessen its overall value in comparison.

[Many thanks to IVP UK for providing a copy in exchange for a fair review.]