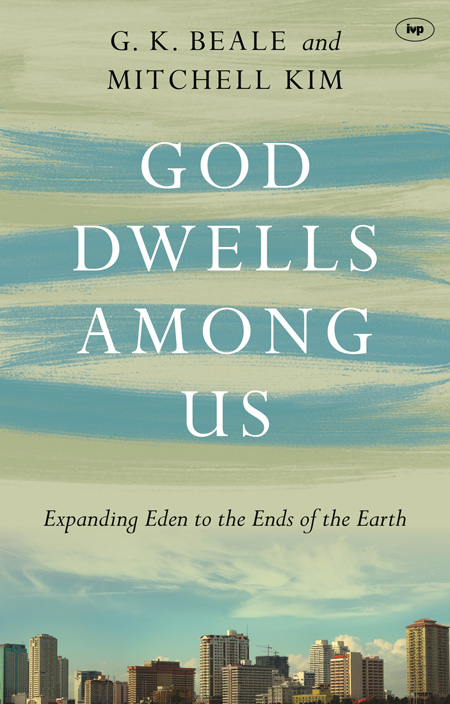 Explorers, mountain climbers, space expeditions. Mankind has a drive to reach the “unobtainable” and bring near the distant. Tragically, the most ambitious and important goal, that of reaching “God”, is truly unobtainable. That is, unless He Himself chooses to draw near to us, which is what our creator God, YHWH, truly desires to do, and this is climaxed in Jesus: God with us. But what else does Scripture reveal about YHWH’s desire to dwell with His people? And what role do we play? In God Dwells Among Us , Mitchell Kim and G. K. Beale have attempted something less ambitious, but ambitious nonetheless. They have a twofold goal: 1) to explore this theme of the unobtainable but near God from Genesis to Revelation in an approachable way, 2) by means of bringing near to us a book that would be otherwise unobtainable to many, Beale’s 458-page groundbreaking academic work The Temple and the Church’s Mission.

God Dwells Among Us: Expanding Eden to the Ends of the Earth

An element of God Dwells Among Us that sets it apart from its mother book is the focus on sacrificial mission. The commission of Adam and Eve to expand and fill the world with worshippers of YHWH has not been revoked (Hab 2:14), although it faces significant, often life-threatening, opposition. We need wind in our sails to propel this missionary endeavor, and the authors believe God Dwells Among Us will serve in such a way.

For those unfamiliar with Beale’s work, this book begins with a surprising statement: the Garden of Eden was a temple. This may seem odd, though a temple is simply a place where God dwells. God chose to dwell with mankind in the Garden, and he tasked them with being his images, living “statues” that represent His rule and subdue and order the rest of the world, transforming it into a hospitable dwelling place for mankind and his God. The goal is a worldwide temple. Of course, sin entered the world, but this commission (Gen 1:28) was passed on to Noah and then Abraham and Israel. Although the world is corrupted by sin, YHWH chose to dwell in Israel’s tabernacle and later, her temples (“Eden remixed”, according to the authors). The temple was a microcosm or blueprint of God’s intentions for the whole world. However, much like Adam and Eve’s exile from Eden, Israel was exiled from the land. But God did not revoke the commission: He would bring Israel back to the land, rebuild the temple, restore Eden and then expand it to a whole new creation. The story takes a radical turn when it is revealed that Jesus Himself is the temple! Jesus is the epitome of God’s dwelling place and God’s promises for a new temple were beginning to be fulfilled in Him, the beginning of the new creation. Jesus then indwells God’s new creation people, the church (Acts 2), by becoming the cornerstone and empowering them to take on the role of temple and are commanded to live in light of this reality and spread His name (1 Cor 3, Eph 3, 2 Cor 6). The temple, then, expands by people flocking to Jesus in faith and becoming living stones in God’s dwelling place. This explains why our work for the Lord in the New Testament is described in terms of priestly service (e.g. Rom 12:1-2). God now gives His church the role of spreading the message of Jesus to the world, thus expanding His dwelling place in the temple. However, the power is not in us but in the Gospel (Compare Gen 1:28 with Acts 6:7 & 12:24) The end goal has not changed from the beginning, the entire creation will be a temple in which God dwells. This is seen in Revelation 21-22, in which an Eden-like-city-temple, shaped like a cube like the Holy of Holies, fills the entire new creation.

I have outlined the story that Beale and Kim tell in God Dwells Among Us . This story is of course supported with Scripture. The authors present their case with laser-like focus and rich insights. The authors are convinced that this story is not only inspiring, but more importantly, Biblical; as such, it must be argued for Biblically. It is here that the book is at at times in danger of overwhelming its readers, as the nature of such a study requires meticulousness. However, the book is also full of illustrations to explain a difficult concept and summaries to keep the reader on track. The illustrations are particularly helpful in this regard.

G. K. Beale and Mitchell Kim should be praised for their desire to produce this book in service of the church, not only by bringing the fruits of academic scholarship to a lower branch, but also for pressing Beale’s original insights to let their missiological juices flow (did that metaphor go too far?). For those who have read Beale’s work, they will find nothing new in God Dwells Among Us, except a distillation of his best arguments and a refreshing focus on missional implications. This book is intended for those who are unfamiliar with such concepts, and though sections of argumentation is unavoidably rigorous and will be difficult for some, the overall message can be obtained by all. Originally delivered as a series lectures, this book could easily be picked up by pastors and taught at their local churches. Whatever we do to get this material into the hands, minds and hearts of the church today, the better. Some will no doubt balk at some of the conclusions here, particularly the assertion that no future architectural temple will be rebuilt. However, stumbling over this would be to throw the baby out with the bathwater. Having experienced the presence of God, let us lay claim to our mission to preach the Gospel to the ends of the earth and declare the message of the unobtainable God who dwells with His people.

This book was provided by IVP UK in exchange for review. Their generosity did not affect my opinions of the book.

Buy God Dwells Among Us from Amazon UK / USA