Do We Read the Old Testament in the Right Order?

Our Bibles today follow a different order than that found in the Hebrew Bible. Why? Is there a correct order, and if so, which is it? In this post I would like to present a few unfinished thoughts on this question and hopefully spark some discussion.

Here are the two orders in visual form (click on each for a larger view). What I have labelled the ‘English Order’ is the one we find in our Bibles today.

Hebrew Order: This has a three-fold structure: Torah, Prophets and Writings. 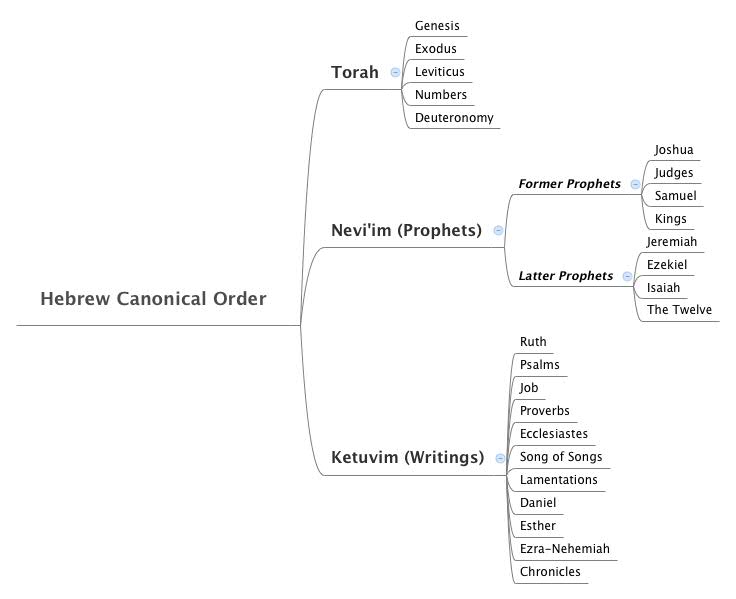 English Order: This is structured by genre and author: Torah/Law, history, wisdom, and prophets. 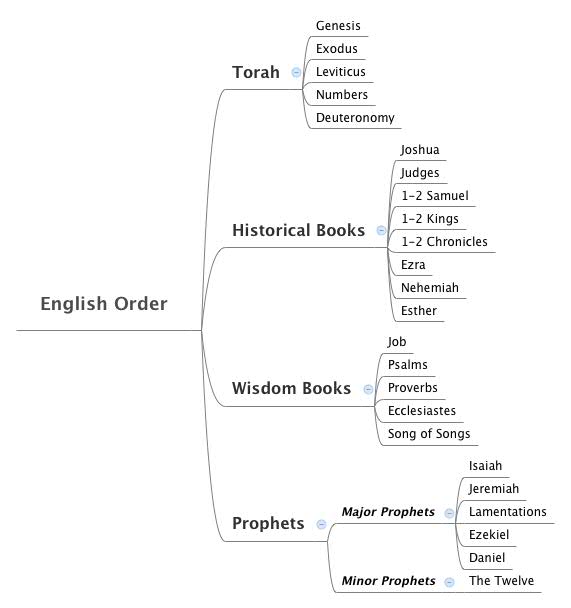 So the question is, which is right? I lean towards adopting the Hebrew order for a few reasons.

1. Jesus referred to it. In Luke 24:44 Jesus appears to refer to the three-fold Hebrew order. “These are my words that I spoke to you while I was still with you, that everything written about me in the Law of Moses and the Prophets and the Psalms must be fulfilled.” (Luke 24:44). Here, Jesus refers to the Law of Moses (Torah), the Prophets, and the Psalms/Writings. Also, in Luke 11:49-51 Jesus speaks of the “blood of Abel to the blood of Zechariah”. Abel was killed in Genesis, and Zechariah in Chronicles (2 Chron 24:20-21), the first and last books in the Hebrew order. So if this was indeed the order that Jesus followed, then why don’t we?

2. Its Narrative-Commentary flow. The Hebrew order has a Narrative-Commenatry-Narrative flow, with the storyline beginning with creation (Genesis) to exile (Kings), followed by reflection on exile (Jeremiah-Lamentations). The narrative is picked up again from exile to a return to the land (Daniel-Nehemiah). Chronicles serves as a recap of sorts, beginning with Adam and ending with Cyrus’ promise to return to the land. This storyline is then carried on in the NT with Matthew’s genealogy being structured around Abraham-David-Exile-Messiah.

3. Genesis and Chronicles. Genesis and Chronicles serve as bookends to the Hebrew order, and there are interesting similarities between the two. Both books are filled with genealogies, tracing God’s provision for the seed of the woman culminating in the Davidic king. Both books are also interested in land. In Genesis, Adam and Eve are exiled from the garden, and Israel is promised a land, but by the end of the story they are exiled in Egypt. Chronicles ends with Israel exiled in Babylon. However, both books end with a hope for promised deliverance (Genesis 50:24; 2 Chronicles 36:23).

4. Reading in light of canonical order. Reading individual books in light of their placement in the Hebrew canon seems fruitful. For example, Wisdom Literature has always been mysterious to me. How does Job fit into the Biblical storyline? What on earth is going on with Ecclesiastes? And so on. As one example, I have been skeptical of those who try and see Job as a metaphor for Israel’s suffering in exile, but if one follows the Hebrew order I think we can have it both ways in light of its placement in the canon. Job is certainly a story of an innocent sufferer, but since it sits in the Writings reflecting on Israel in exile, it no doubt takes on an additional meaning. Exile makes sense for unrepentant Israel, but why are the faithful remnant in exile also? Why are the righteous suffering? Is God unjust? None of this distorts the original meaning of Job, but it allows us to see additional depth. Just as, in light of the entire OT and NT canon, we can see Jesus as the true innocent sufferer without being unfaithful to Job’s original context.

5. The Eschatological focus. Genesis begins with Adam and Eve being exiled from the Garden. Kings ends with Israel being exiled from the land. Jeremiah (following Kings) prophesies that Israel will return from exile after 70 years. Daniel (picking up the narrative), after reading Jeremiah’s prophecy, receives revelation that the return from exile will take two stages (Dan 9). Yes, they will return after 70 years, but the greater return will come after 70×7 (490 years), with the Messiah bringing an end to sin. Despite Israel returning to the land (Ezra-Nehemiah), the canon ends with Chronicles, with Israel in exile and Cyrus promising a return, reminding us of Daniel’s unfinished prophecy. The Hebrew structure itself strongly emphasizes this eschatological focus, anticipating Daniel’s predictions of the coming Messiah and God’s kingdom breaking in. 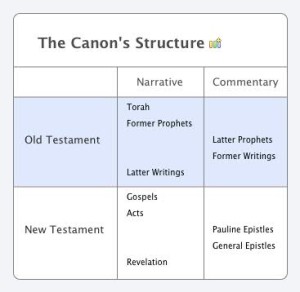 Its relationship to the NT. So what about the New Testament? Well, its structure also lends itself well to this structure and parallels it in some ways. Here are a few that come to mind.

The Gospels parallel the Torah. John 1 portrays Jesus’ coming as a new creation (“in the beginning”). Matthew presents Jesus as a new Moses who comes out of Egypt, goes through the sea, wanders in the wilderness, gives the law on the mountain, and so on.

Acts has much in common with the former prophets. The storyline continues with word of Christ conquering the Gentiles, and the temple being established (the church).

Like the latter prophets, Paul’s letters stop the narrative, and reflect on what has come before. Paul portrays his call in ways similar to the prophets (compare Jer 1:5 with Gal 1:15), explains the relevance of Christ’s work and provides guidance for His people to follow and obey.

The former writings and general epistles are a little less obvious. The narrative is still on pause, and the commentary continues. James is often considered ‘wisdom literature’ for the New Testament. Perhaps there are more connections that I’m not seeing?

Lastly, Revelation continues the narrative, much like the latter writings, with the story coming to an end. Daniel’s kingdom language is prominent in Revelation. In fact, Revelation quotes and alludes to the OT constantly, seeing itself as the conclusion of the storyline and the capstone to the Bible. Revelation not only parallels the writings, but also Genesis. New Creation. A new Eden. The Tree of Life. The presence of God.

So there you have it. Those are some of my thoughts on this Hebrew structure of the Old Testament. This is much a work in progress, so I certainly welcome comments! Whether insights, criticism or agreement, I’d love to hear from you.

Here are some links that were influential for me or touch on similar questions.