John Piper, Brian Zahn, N. T. Wright and Steve Chalke walk into a bar… Whatever hilarity may or may not ensue in this scenario, I can assure you that a discussion on the atonement would be anything but humorous.

if God did not punish his Son in my place, I am not saved from my greatest peril, the wrath of God.

penal substitution is tantamount to ‘child abuse – a vengeful Father punishing his Son for an offence he has not even committed.

Or, compare the similar, but more recent:

the Bible is clear, God did not kill Jesus […] it was not a sacrifice to appease a wrathful deity or to provide payment for a penultimate god subordinate to Justice. 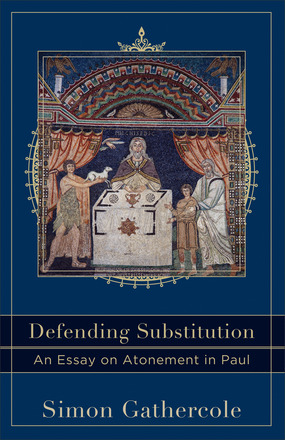 Not funny at all. In fact, entirely humorless. The question of whether Jesus took our wrath is sobering, but given what is at stake, essential. However, observing this stalemate situation, what am I to do? Enter the unassuming Simon Gathercole with his little book Defending Substitution.

Now, it must be noted that my illustration falls apart a little, for Gathercole is not setting out to establish penal substitution (that Jesus took my punishment); rather, he has a more modest goal: did Jesus die in my place in any sense? Or in other words, did Jesus die so that I would not? It’s worth saying here that in no way does Gathercole deny the very biblical sense in which we do die with Jesus (Rom 6:8); his point is that there is more to say than this alone.

In the introduction, he surveys three nonsubstitutionary approaches and their strengths and weaknesses. These are the Tübingen school, the Interchange model associated with Morna Hooker, and the Apocalyptic paradigm. Though each model is praised on several accounts, Gathercole notes that each fails to give sufficient weight to the problem of “sins”. That is, these models do not account for the problem of individual sins committed by individual people. This leaves a theological hole that substitution fills. If the problem were merely “sin”, then Christians simply need to be freed. However, if the problem includes “sins” that humans are culpable for committing, then deliverance is not enough; payment must be required. Hence the need for substitution.

1 Corinthians 15:3 states that Jesus died for our sins according to the Scriptures. Supporting Paul’s focus on “sins”, the Old Testament supports the notion that one dies for their own sins (1 Kings 16:18-19). However, what if one could die for the sins of others? Gathercole argues that the Old Testament passage that is conceptually closest is that of the Suffering Servant in Isaiah 53 (e.g. Isa 53:12). This is supported when we recognize that Romans 4:25 and Rom 8:32 allude to Isaiah 53 as well (see Isa 53:6).

In contrast with 1 Corinthians 15:3 and its dependence upon the Hebrew Scriptures, Gathercole argues that Romans 5:6-8 alludes to other heroic deaths from the literature and stories of his Greco-Roman cultural environment. In this chapter, Gathercole references classical works that depict one dying a heroic death on behalf of another. However, unlike these other deaths, Jesus’ is entirely unique, hence Paul’s statements in Romans 5:6-8!

After 29 chapters of Job debating with his three “friends”, the stalemate was broken by the appearance of young Elihu. The opinions of scholars are poles apart. Some recognize Elihu as an arrogant upstart who offered nothing new. Others compare him to John the Baptist, preparing the hearts of his hearers for Lord Himself. Which best describes Defending Substitution? As with Elihu, there will be a polarity of opinion. Either Gathercole achieves his thesis or he does not. Gathercole is to be praised for his characteristically careful and balanced argumentation. He presents a nuanced case and does not overstretch himself in this goal. While some will see Defending Substitution as unhelpful and unwelcome as Elihu, but in this reviewer’s humble opinion Gathercole is simply correct.

Satisfied, I leave behind Piper, Zahn, Wright, and Chalke to argue while I exit the bar, quietly whistling the melody of “in my place, condemned He stood”.

Many thanks to Baker Academic for providing a digital review copy. Their generosity did not affect my opinion of this book.

Send In Your Links for the July Biblical Studies Carnival!