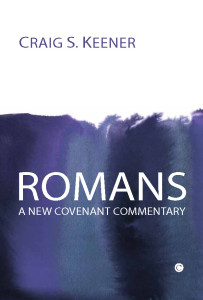 Craig Keener is professor of New Testament at Asbury Theological Seminary, a human encyclopedia of ancient literature and an all-around fascinating guy. He also writes epic commentaries, such as his 1,636 page commentary on John and his multi-volume work on Acts (vol 1. of the intro through Acts 2:47 is 1,104 pages!). This makes his 300 page commentary on Romans in the New Covenant Commentary series (NCCS) a bit of a surprise to say the least.

This (relative) brevity is in line with the NCCS theme of producing “concise, academically informed commentaries for a general audience” (p xi). The intention is to make the best of academics accessible. After a 17 page introduction, Keener gets straight into the text, summarizing the main themes in each pericope and providing tables, excurses and practical sections (“fuzing the horizons”) throughout that all make this commentary stand out from others.

The excurses vary from Paul and the law (Rom 7) to the relationship between the church and state (Rom 13). These are helpful in giving complicated issues more space without cluttering the commentary text itself. They were all useful, but particularly so was Keener’s discussion of homosexual practices in the ancient world, where he brought his wide knowledge of ancient documents and culture to bear on a very controversial topic today.

Here I’ll summarize some of Keener’s comments and views on various passages throughout Romans:

As seen in the points above, Keener chooses to avoid many of the debates that arise from passages such as Romans 2, 7, 8 and 9. The reason for doing so is two-fold: Keener emphasizes Paul’s rhetorical purposes in Romans and believes these debates are secondary, and no doubt the space restrictions also played a part. For some this will be a welcome change, but others may feel that Keener overemphasizes rhetoric and dismisses important passages as a result. Either way, this focus on Paul’s rhetoric enables Keener to stay on task throughout the commentary, which is a welcome change.

Keener’s encyclopedic knowledge of ancient sources plays a large part in this commentary. It’s safe to say that more than half of his footnotes are references to other ancient documents. In fact, to illustrate my point, 26 pages of the commentary are devoted purely to listing these documents that Keener refers to! This is a very unique contribution in Romans commentaries, but I wonder how useful they will be to the NCCS target audience. Those without knowledge of or access to these documents will find these references unhelpful. I for one have no idea what most of these texts are, and Keener often doesn’t explain why he refers to them in the footnotes, so they were largely irrelevant for me. The value of this feature will be subjective; however, these are restrained to the footnotes and can be easily avoided, and Keener’s knowledge of these texts is very beneficial in the excurses.

I have a few complaints not about Keener’s work, but about the NCC series itself. The binding of these books feels particularly cheap and the covers bend and fray very quickly. Second, despite an author’s own outline of a book, they are restricted to a chapter-by-chapter structure in the commentary itself. For example, Keener sees a shift in between Rom 5:12 and 5:13, but has to comment on Romans 5 in its own chapter because of how the series works. Considering chapter breaks a relatively recent development in Scripture, it’s a shame the commentator is restricted in this way. Lastly – and this is entirely subjective – the excerpts use a sans-serif font that is not a pleasing combination with the regular font.

Craig Keener has provided a helpful and brief commentary on Romans. The commentary itself is just under 200 pages, which is impressive for such a rich book. While the brevity makes this attractive to general readers, some may struggle with some unexplained technical/theological jargon; however, this should not dissuade one from picking Romans up. Keener’s Romans would serve well both as a broader overview commentary, or as a second opinion alongside a larger work like those of Kruse, Schreiner or Moo. Keener’s clear writing, attention to Paul’s rhetorical purposes, and fantastic tables and excurses all make his Romans commentary a welcome contribution to a dense and difficult book of Scripture.

[Many thank to The Lutterworth Press for providing a copy of this commentary in exchange for a fair review.]