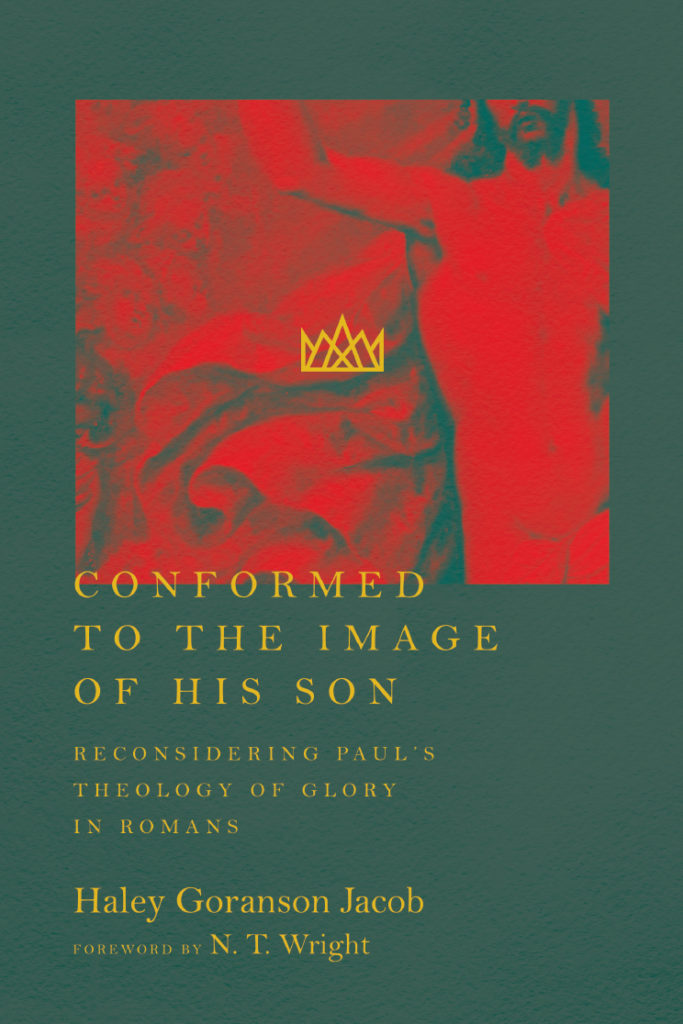 Romans 8:28-30, among the most quoted passages in the Bible, has long been misunderstood. That is the thrust of Haley Goranson Jacob’s argument in Conformed to the Image of the Son. The problem: we do not properly understand glory, the glory of humanity, and what it means to be conformed to Christ’s image. This thorough and thoughtful book by a upcoming female scholar aims to set us right.

Conformed to the Image of the Son

Rather than being understood from indepth lexical study, “conformed to Christ’s image” is more commonly “used as support for a presupposed theological or eschatological ideal” (p. 2). Jacob identifies six common categories for how other writers have understood the phrase:

Jacob’s view is that conformity to Christ refers to a vocation and that glorification refers to rule (with Christ); a rule that begins now and continues into the new creation.

Chapter 2 is a thorough (40 pg) investigation of “glory” language in Jewish literature. Though many assume that “glory” refers to luminescence, the word group primarily refers to “honor, power, wealth, or authority associated with an exalted status of rule” (p. 63).

Chapter 3 traces “glory” and “glorification” language throughout Romans and how it has been interpreted by others, before suggesting a “narrative of glory” that runs across the letter. In Romans, humankind’s glory is an honorable position of rule.

Chapter 4 addresses three related issues that help us understand Romans 8:29. First, Jacob develops Paul’s concept of incorporation (or union) with Christ, one that includes a “vocational participation” (p. 123) where believers are glorified to live out their newfound calling. Second, she examines Philippians 3:21, given that it has the only other appearance of “conformed” in Paul’s writing. Third, she examines both 1 Cor 15:49 and Col 3:10, given that they include “image” language in the context of ruling with Christ.

Conformed to Whose Image?

Chapter 5 considers the “image of the Son” (Rom 8:29) and concludes that Paul is envisioning Jesus as both a Davidic Messiah “son” (e.g. Ps 89; 110) and the new Adamic “son.” Believers are conformed to the image of a new humankind embodied in the Messiah.

Chapter 6 continues to hone in the focus by arguing that “conformed to the image” (Rom 8:29) specifically refers to participating in “the Firstborn Son’s honorable status of power and authority over creation as adopted members of God’s eschatological family and as renewed humanity” (p. 202). Jacob establishes this through noting the new-exodus adoption motif in Rom 8:1-30, the relationship between inheritance and glorification with Christ in Rom 8:17, and “glorified” in Rom 8:30.

Chapter 7 pulls all the pieces together by arguing that a proper understanding of glorification reveals that it is not only a future reality, but a very present one. Glorification, vocational participation, is not only a future hope but a present call. This addresses why Paul would say that believers were already “glorified” (Rom 8:30); an idea that has puzzled interpreters for centuries. Glorification, then, is not coextensive with resurrection. Rather, it occurs in two stages. First, it is a present reality to those who are freed from the powers of sin and death. Second, resurrection brings it to fullness.

Building Upon the Argument

Jacob’s argument, though technically restricted to Romans, has wide-reaching impact. This is the kind of book that sparks others to come along and build upon it, reaping its biblical, theological, pastoral, and practical implications. I eagerly await a re-thinking of Pauline references to glory in his other letters. Jacob’s argument is also highly important for a theology of work, for example.

Though Jacob is characteristically thorough, I find her treatment of Daniel 12:3—arguably the most important resurrection passage in the OT—to be lacking. She argues that the “shining like stars” is “metaphorical language to describe the exalted status/life of the dead who rise to eternal life” (p. 58). This is due to her observation that stars are associated with rule and kings. However, I think there are missing pieces here. Rather than kings, stars are more regularly associated with heavenly beings (e.g. Deut 4:19; 17:2; Judg 5:20; 1 Kgs 22:19; Neh 9:6; Job 22:12; 38:6-7). Also, Daniel 12:3 likely alludes to the Abrahamic promise that his seed would be quantitatively and qualitatively “like the stars” (Gen 15:5) as has been pointed out by David Burnett. Psalm 8 is rightly important to Jacob’s argument that in Christ we regain Adam’s lost glory. However, when the NT quotes or alludes to Psalm 8, it regularly does so in reference to Jesus’ exaltation not only over the earth, but specifically over the heavenly beings (e.g. Eph 1:20-22, see also). Thus, glorification is not merely a return to Adamic glory; it is an elevation to a higher place of rule. What does this mean for Jacob’s argument? I wonder if in her attempt to recapture the earthy and “already” element of glorification, Jacob downplayed the heavenly and “not yet” element of it. We will not only rule the earth, we will judge the angels who were given authority over it (1 Cor 6:3; Deut 32:8-9; Ps 82). What’s more, what is the nature of our resurrection bodies if they are associated with heavenly beings in some way? Though it is it not crippling to her argument, Jacob overlooks the important “divine council” element in these texts.

The argument in Conformed to the Image of the Son is logically and comprehensively presented. Jacob maintains her laser sharp focus throughout the book. One sees where she is headed as early as the first few chapters. Each new chapter methodically moves forward and virtually pummels the reader with the inescapability of Jacob’s conclusions. Though she missed the important “divine council” connection, this is a highly significant work. I hope and expect that many will be convinced by her thesis. Who knew that Romans 8:28-30 could be more glorious?

If you buy Conformed to the Image of the Son through this link, MDS will receive commission.

Many thanks to IVP Academic for providing a copy of the book. I was not required to write a positive review.