Why Choose Abraham for Romans 4? 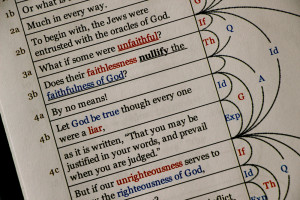 Romans 4 is about Abraham and how his saving faith is a paradigm for our own saving faith. But why choose Abraham? Why not Moses, David, Zechariah, Joshua, or any of the other faithful men of God in the OT? Why Abraham?

Here are a few thoughts, and I’d appreciate yours too!

Why Choose Abraham for Romans 4?

1. Abraham was a profound and extensive example of faith.

This is the most common answer that I run across. Abraham is a great example of faith, and his story in Genesis is rich with information for us to consider. Unlike the stories of other believers, Scripture tells us quite a lot about Abraham’s faith and how it was “counted to Him as righteousness” (Rom 4:3; Gen 15:6). So who better for Paul to refer to if he is trying to establish that salvation is through faith alone?

So far, so good. But I would argue that there are additional and more profound reasons than this alone.

2. Abraham was the father of the Jews.

Not only was Abraham a perfect example of faith, but he is the father of the Jews. He is therefore the perfect choice for Paul to demonstrate to Jews that salvation has never been by works of the law, but rather by faith. If Jews consider themselves true children of Abraham, then they would follow his example.

3. Finding salvation by faith in Abraham upholds the law.

The verse immediately before Romans 4 is Romans 3:31, “Do we then overthrow the law by this faith? By no means! On the contrary, we uphold the law”. When Paul says “law” he means more than “laws”, but to the Torah itself (e.g. Rom 3:21). Paul even sometimes uses “law” to refer to the entire Old Testament (1 Cor 14:21, quoting Isaiah). A natural question in respect to Paul’s Gospel is whether it is in accord with the Hebrew Scriptures, and so here Paul affirms that his teaching is completely consistent with the Old Testament, drawing on Abraham as his key witness.

4. Abraham is the father of the promise.

I’ve heard Romans 4 taught as an example of generic faith, or to argue that Abraham just believed in God alone and was saved. However, when we consider the context of Genesis 12, 15, 17 we realize that this is not some mere generic faith of Abraham’s, but rather faith in the promise. The promise of what? The Messiah! The seed of Genesis 3:15 who would undo the curses of Adam and bring worldwide blessing. So Abraham didn’t just believe one of God’s promises, he believed in God’s promises in the trajectory of the Messiah.

Christians wonder how Old Testament saints were saved. Were they saved like we are, through faith in Jesus? It seems like Romans 4 says the reverse: that we are saved like Abraham!