Review: The Birth of the Trinity by Matthew Bates 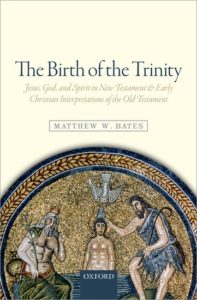 G. K. Chesterton tells the tale of of a man who sails out to discover a new land, only to mistakenly return to England and proceed to plant a British flag in this apparently virgin land. For Chesterton, this allegory captures the adventure of discovery and the familiarity of home. I suspect when studying for The Birth of the Trinity, Matthew Bates had a similar experience to Chesterton’s Englishman, as I certainly did when reading his book.

» Read the entire post: Review: The Birth of the Trinity by Matthew Bates  »

Over the past few weeks I’ve been working through Michael Heiser’s The Jewish Trinity and posting snippets as I go, but in this post I will give some concluding thoughts and review the whole enchilada.

I’m working through Heiser’s The Jewish Trinity (other posts) Logos Mobile Ed course. So far Heiser argued that the Old Testament teaches the existence of multiple elohim (“gods”) and that this is not incompatible with monotheism. Recognizing divine plurality in the OT is one step closer to recognizing plurality within God Himself, which sets a foundation for the NT doctrine of the Trinity.

» Read the entire post: Divine Plurality vs “No god beside me”  »

The Sons of Israel or the Sons of God? (Deuteronomy 32:8)

We’re working our way through Michael Heiser’s Logos Mobile Ed Course The Jewish Trinity (other posts). One major step in Heiser’s argument is in explaining that the Old Testament teaches a council made up of Yahweh and other elohim, otherwise known as the divine council. It may be surprising to many that such an idea is found in the Scriptures, but for Heiser this neglected truth can assist in Jewish evangelism. Recognizing divine plurality in the OT helps clear the ground for plurality within YHWH Himself.

» Read the entire post: How Do I Respond to a Jewish Objection to the Trinity?  »