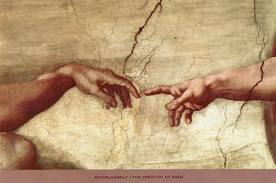 There is substantial debate in Christian circles today about the historicity of Adam and Eve as recorded in the Bible.

The current scientific opinion about evolution has kicked this issue into high-gear, with Christians taking opposing sides.

There has been a growing number of evangelical Christians who argue that we need to embrace some kind of non-literal view of Adam that is compatible with evolution. Biblical scholar Peter Enns is a good example, he says the following in a Huffington Post article:

Evangelicals look to the Bible to settle important questions of faith. So, faced with a potentially faith-crushing idea like evolution, evangelicals naturally ask right off the bat, “What does the Bible say about that?” And then informed by “what the Bible says,” they are ready to make a “biblical” judgment.

This is fine in principle, but in the evolution debate this mindset is a problem: It assumes that the Adam and Eve story is about “human origins.” It isn’t. And as long as evangelicals continue to assume that it does, the conflict between the Bible and evolution is guaranteed.

BioLogos, which claims to be “a community of evangelical Christians committed to exploring and celebrating the compatibility of evolutionary creation and biblical faith” presents the following options for understanding Adam:

So does it matter? Is anything lost if we accept that the Genesis 1-2 account isn’t about human origins? Other Christians say ‘yes’, and are meeting the challenge.

Michael Reeves argues in an excellent DesiringGod article that the gospel itself would be lost if Adam wasn’t real. You’ll have to read his entire article, Why the Good News Turns Bad Without Adam.

Kevin DeYoung gives 10 Reasons to Believe in a Historical Adam. This post responds more to the actual claims of the skeptics. His actual arguments are fleshed out in the post, but here are his points.

For me, one of the strongest problems is that the Bible presents death as a result of sin, but evolution presents it as commonplace. If evolution is true and death occurred thousands/millions/billions of times before sin entered the world, then how exactly does Jesus defeat death by defeating sin?

I predict this as an issue that is filtering down into the ‘mainstream’ for Christians. That is, I believe every Christian will be confronted with this in the near future (if not already). So we need to see what is at stake, lest we be carried away with public opinion.

Praise God that Jesus is our Second Adam!

Did Old Testament Believers have the Holy Spirit?

Watch me fail my 2013 reading goal