A Story of Grace by Phil Metzger 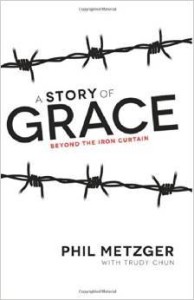 “How was your time in, uh, Bulgaria?”

I was posed this question upon returning home to Australia, having spent the past 5 months at a Bible college in Hungary, not Bulgaria. I didn’t have the heart to correct the question since I knew a Turkey joke would soon follow (“why don’t the Hungary people move to…”). I had just returned from having my paradigms shifted and mind expanded through seeing what the Lord was doing in this wonderful nation. Before, I was naive about world missions and the spiritual state of Europe; two things that were soon put to right!

But to answer the question: quite a lot was – and is – going on in Hungary, even if the country can be relatively unknown to outsiders. Through a few missionaries travelling to Eastern Europe in the 1980s to see “what God might do”, Hungary had been experiencing somewhat of a revival of faith in Jesus, and Phil Metzger’s A Story of Grace tells some of the stories, particularly those surrounding the Golgota (Golgotha) movement.

A Story of Grace

A Story of Grace is far from dispassioned reporting of history, it is a record of God’s activity in a nation. However, neither does it hide the dark and only tell the light: the mistakes and failures of missionaries and Hungarian believers are not ignored. Metzger is no backseat observer, either; he has been through the thick of it himself, and currently serves as the lead pastor of Golgota Budapest.

Filled with many “stories of grace”, this is certainly an encouraging book. One takeaway is a constant recognition of God’s sovereignty in reaching the lost. The missionaries constantly presented God as the major character, God as the one who is truly doing the work of grace, but faithfully carrying it out through the simple obedience of His willing people.

I was in Hungary for around a year (2007 and 2008) and got to see some of the fruit myself. It was encouraging to put together the missing pieces in some of the stories I had heard, and even many others that I heard or experienced myself were left untold. This is not a fault of Metzger’s, but evidence of God’s powerful work in Hungary!

As is often the case with missionaries returning home, I wanted to share my experience with everyone I knew, but also realized one has to be there to truly get it. However, as an encouraging collection of stories of the work God is doing in Hungary, A Story of Grace is the next best thing! I highly encourage it to anyone wanting to be encouraged with God’s faithfulness, particularly anyone with a heart burning for salvation in Europe. Many stories of grace are left untold, others are unfolding as I write, and others are yet to be told by men and women who simply “stepped out” in faith to see what God might want to do.

Buy A Story of Grace from Amazon: UK / USA

Did the Apostles Know Their Own Authority? The Question of Canon #4